Cardinals look to slow down NHW in first round of state 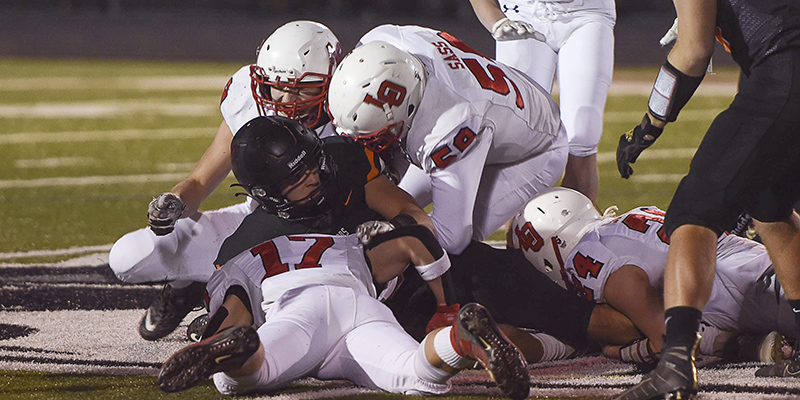 The LeRoy-Ostrander defense comes together for the stop against Lanesboro Friday night in the Section 1 Nine Man title game at Triton High School in Dodge Center. Eric Johnson/photodesk@austindailyherald.com

The Cardinals are ready for a change of pace as they will face off against a pass-happy team in the Minnesota Class Nine Man State Tournament quarterfinals at 7 p.m. Thursday at Macalester College in St. Paul.

After locking down run-heavy Lanesboro by a score of 30-6 in the Section 1 Nine Man title game last Friday, the Cardinals will try to slow down Wheaton/Herman-Norcross (9-2 overall), which likes to spread it out and pass the ball.

L-O (9-2 overall) hasn’t played a lot of offenses like WHN this season, but Carrier said that Mountain Lake and Spring Grove both had similar looks. L-O held those teams to just six points each in regular season matchups.

“They want to throw the football around. They’re very similar to Mountain Lake in terms of their philosophy on offense,” Carrier said. “They’re going to try and spread us out. Our D line has to push the pocket and play big. We’ll continue to do what we’ve done in the past.”

A lot of the Cardinals haven’t played a varsity football game on turf before last week’s game in Triton, and now they’ll be taking it up to the Twin Cities.

Cardinal spirit is running rampant in LeRoy-Ostrander, where the community, the school and the administration have rallied behind the team.

“The excitement is real in small town America,” Carrier said. “We’re in a situation that we haven’t been in for a long time. Everyone is excited.”

This is the Cardinals’ first trip to a state football tournament in 15 years.