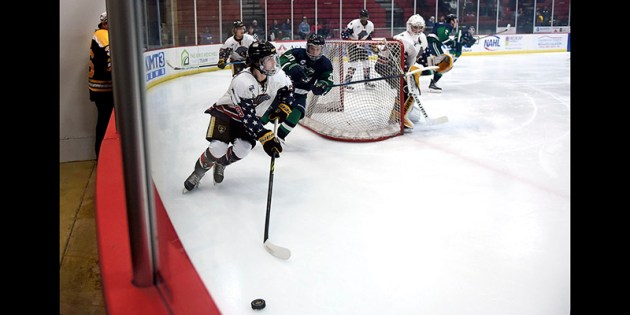 The Bruins’ Nick Catalano chases the puck around the boards in the first period against North Iowa Friday night at Riverside Arena. Eric Johnson/photodesk@austindailyherald.con 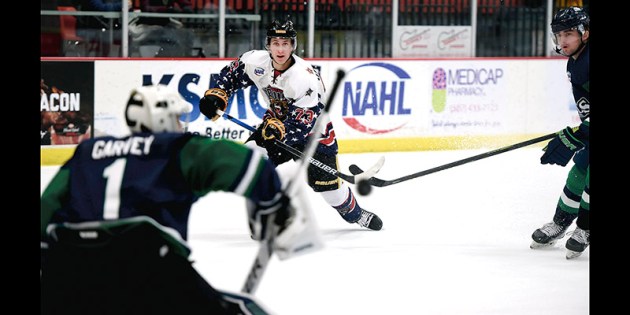 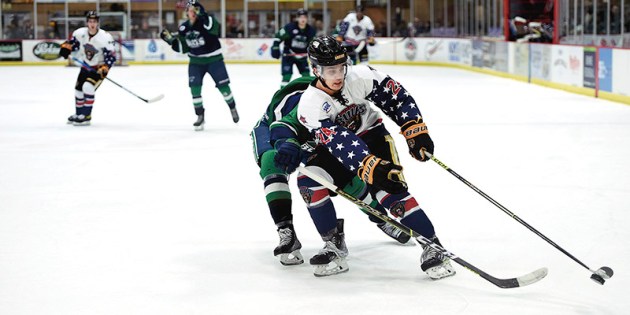 The Bruins’ Isaak Brassard angles toward the goal during the first period against North Iowa Friday night at Riverside Arena. Eric Johnson/photodesk@austindailyherald.con 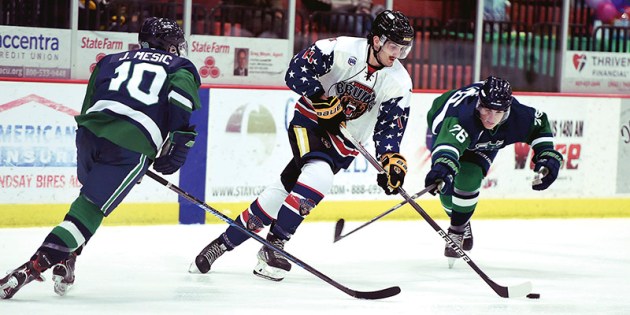 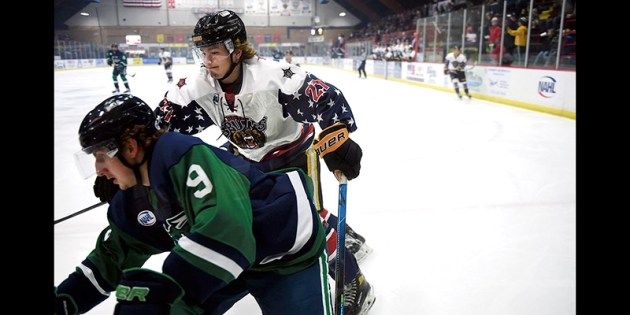 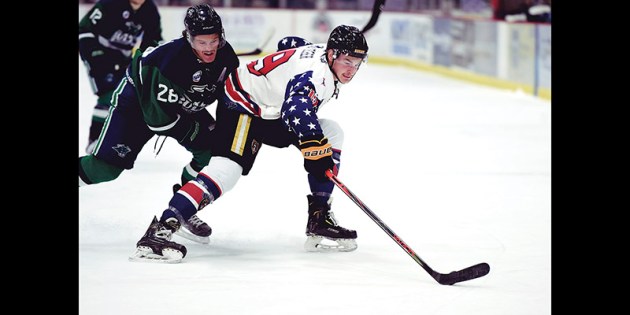 It was a fight to the finish as the top two teams in the NAHL Central Division squared off in Riverside Arena Friday.

The contest fittingly went the distance and the North Iowa Bulls walked away with a 3-2 shootout win over the Austin Bruins in a game that saw both teams have late opportunities to win.

Klayton Kapp stopped two of four shots in the shootout for Austin, which went one-for-four on its chances. Alex Trombley had Austin’s lone shootout goal.

Austin head coach Steve Howard said every game is now a big test for Austin if the Bruins want to stay at the top this season.

“I feel like all of them have been big games,” Howard said. “That’s the price you pay when you’re sitting in first place with a target on your backs. Everyone wants to knock you off, and hats off to North Iowa they played well. I thought we had plenty of opportunities to cap it off, especially with the power play. We’ve got to be better.”

Austin’s John Larkin took a stick to the face to draw a penalty with 31 seconds left in the overtime period, which gave Austin a four-on-three advantage. The Bruins weren’t able to cash in as they failed to score on multiple shots in the late seconds.

The Bulls had a clear shot at victory early in overtime, but Simone Dadie’s breakaway look sailed wide of the net.

Gavin Morrissey nearly gave the Bruins (11-4-1-2 overall) the win in regulation, but was denied on a point blank opportunity by Bulls’ goalie Hunter Garvey with 19 seconds left in the third period.

The Bulls (11-4-0-2 overall) held a 2-1 lead in the second period, but Austin tied it up at 2-2 when Isaac Brassard, a rookie from Montreal, connected from 20-feet out on an unassisted slap shot to score his first career NAHL goal.

“It feels really good to score, but unfortunately we didn’t win,” Brassard. “We have a really special team and we’re really tight. There’s going to be bad bounces and we’ve got to make sure we recover from those bad bounces and mistakes.”

The Bruins cashed in on a power play in the early minutes of the game as Carson Riddle found the back of the net on a one-timer near the net. It was Riddle’s eighth goal of the season.

Nakodan Greyeyes and Ocean Wallace were each playing in their first game of the season for Austin.

“That was their first game with us and they’re going to get better as the season goes on,” Howard said. “Nakodan’s been here for a couple of months, but he’s been injured. It was nice to get him back.”