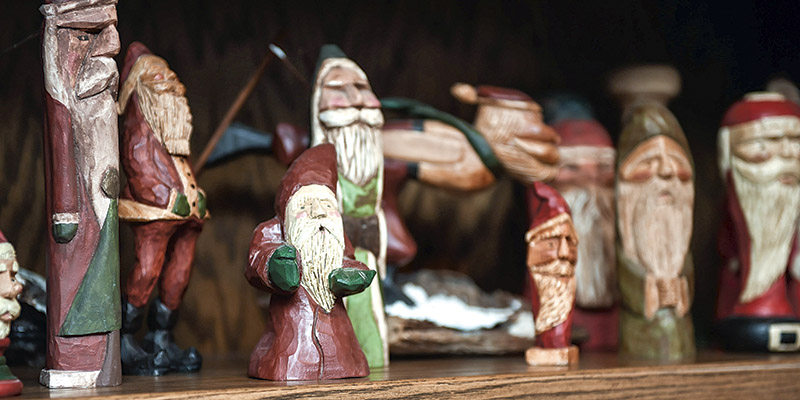 It’s amazing what a $10 purchase can do for your life.

For Dave Dammen, a simple $10 woodcarving knife has led to a longtime hobby that’s nearing 20 years of shaving wood.

Throughout, he and his wife Diane’s home are dozens and dozens of examples of Dave’s work over the years. Two full shelves in the couple’s downstairs den are devoted to Santas of varying sizes and shapes. Carvings of ducks occupy stands of their own and, of course, there are the rocking horses — a few occupying space in the den, while several others, ranging from large, usable horses down to decorative pieces, rest on shelves and the floor in an adjoining bedroom.

That’s not even accounting for the array of carvings at the Dammen’s cabin near Lanesboro, including carved busts of Native Americans and large-standing totem poles he carves from his small shop in the backyard of their Austin home.

And it all started with a simple knife bought during a basketball tournament the couple was attending.

“In 1990 (my son) bought me a couple cutouts of a dog,” Dave remembered. “That cutout laid on my bench for a year. During a tournament game in Rochester, we went to a craft store and they had a knife there for $9.95.”

“She made me buy it and I came home and carved that dog,” Dave continued. “Then I couldn’t wait to get more wood to carve.”

The hobby only grew from there. In those early days it consisted mostly of Santas, some of which Dave doesn’t hesitate to describe as bad. But, it didn’t take long before many of the figures he carved took on a life of their own.

These carved Santas became gifts for family and friends — but only the copies. 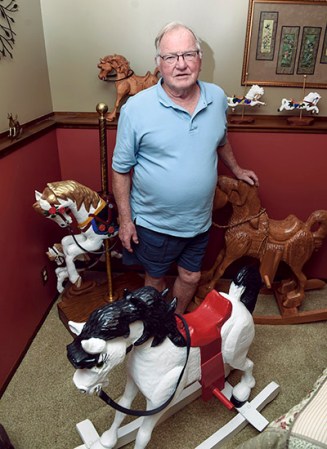 Dave Dammen stands with an array of rocking horses he carved. Eric Johnson/photodesk@austindailyherald.com

Dave was never formally trained to carve wood. Self-taught from the beginning, Dave honed his craft, refining it as he did his creations.

Along with some other carvers, Dammen helped create a group for carvers that would learn from each other.

“Once or twice a month we would get together and you would learn from others,” Dave said. “Eventually, I taught woodcarving in a community ed class in Blooming Prairie and I had a pretty good following. Out of that class over the years, two carvers became better than I am.”

This constant improvement gradually led to bigger and more extravagant projects that required great chunks of time to complete.

“The rocking horses — they were the next big thing,” Dave said, explaining that the projects start as a number of pieces of wood being glued together. “Once you get that big block of wood your start whacking away.”

The amount of time that first rocking horse took was a hefty 260 hours initially, with an additional 30-40 hours just to finish it to a polished sheen. However, like anything, Dave said that he has become more efficient as he continues to carve.

The goal is worth the time. The couple have eight grandchildren with eight rocking horses reserved for all of them. So far, only once has been given away.

Dave retired in 1997 and taught classes for another five years after that. He continues to carve, but now it’s largely for himself with no real teaching.

“Your working on the satisfaction of starting to see out a block of wood,” Dave said. “It starts taking shape and its good to see a block of wood come to life.”

Diane enjoys seeing the final project, admitting that each Santa has a personality all it’s own.

Dave Dammen demonstrates his woodcarving skills on one of his current projects, a totem poll in his backyard work shed.
Eric Johnson/austindailyherald.com

“I looked at these Santas and said, ‘I suppose I go to bed and you all come to life. You all have a different personality,’” she said.

While the Santas are usually gifts or created to be sold; and the rocking horses are for family, the totem poles and Native American busts at his cabin are something of a different story unto themselves.

“I don’t  know how I got started,” Dave said. “Some years back, I cut a basswood tree down and had these huge poles sitting in the garage at the cabin.”

Not content to leave a piece of wood uncarved, Dave went to work, first on the busts that adorn the cabin throughout. Like the rocking horses, the ideas expanded.

The poles are his own creations and ideas, starting with the purchase of a book. However, the totems soon featured his own patterns, and things just exploded from there.

Currently, there are two such poles at different stages of work in his backyard workshop. Even as he showed them off, Dave picked up a carving knife and wooden mallet and went to work, lovingly shaving off slivers of wood and explaining how you do so as well as why he carves wood.

Carving isn’t always relaxing, however. Work long enough with sharp instruments of craft and you are bound to have accidents. Dave takes them in stride, even when Diane is needed to intervene.

“Early on I was down here at my work bench working and made a little slip and caught my hand,” Dave said. “There was blood over a new carving book. She said, ‘Look at the book, you got blood over all over it.’ She started wiping off the book.”

Another time, he dropped a knife that landed between his toes, only to find out when picking it up that it didn’t just land between, but very much in one of his toes.

“It wasn’t bleeding,” he said smiling. “I pulled it out and it started bleeding.”

But the carving continues, and Dave has very little intention of slowing down. It certainly qualifies as a passion, and while he does make some money off his creations, Dave is hoping that they can be a little more; a keepsake that people can look at and enjoy. He also hopes it carries meaning within his family through the years; something for grandparent and grandchild alike.

“I didn’t have anything to do with my grandparents,” Dave said. “I taught a couple of the kids to wood carve and I hope the rocking horses they have forever and maybe pass them down to their kids.

Cardinals look to slow down NHW in first round…