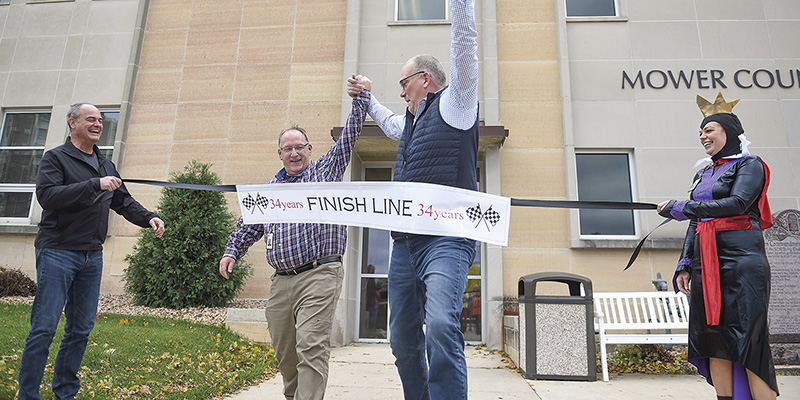 Brent Gunderson, right, and Todd Lysne cross the finish line together as they head into retirement Friday afternoon after 34 years of working with Mower County Health and Human Services. Eric Johnson/photodesk@austindailyherald.com

Ask any department in any location and they will tell you that to lose a long-time employee to retirement is often a blow. But when you lose two people on the same day with 34 years of experience each, well that’s something else entirely.

Nevertheless, the scene was celebratory when Brent Gunderson and Todd Lysne walked out of the Government Center for the last time Friday afternoon.

Co-workers were waiting to congratulate the duo as they strolled hand-in-hand through a ribbon marking the finish line.

“It was more difficult than I thought it would be,” said Lysne, who was an income maintenance supervisor for Health and Human Services. “I’m just going to miss the people. That’s the biggest thing.”

Gunderson, a family facilitator, agreed. He said that while some days were harder than others, he knew he had a strong work family waiting.

“It made the job easier,” he said. “Just having these people to work with. You knew you have that family available to us.”

It’s not just coincidence that both men retired the same day. After all, they started at the same time and both can vividly remember the changes  along the way.

“There were no computers on the desks,” Lysne said, looking back to when he first started.

Both men were also honored on Tuesday during the Mower County Board of Commissioners meeting. It was a packed house behind them as the board recognized their years of service, which began in 1987.

“It’s going to be a great loss,” said Health and Human Services Director Crystal Peterson during the meeting. “I just want to thank you for your dedicated carers to Mower County.”

“These two are so much fun and they get the job done at the same time,” King said.