Volunteers band together on project to investigate owls 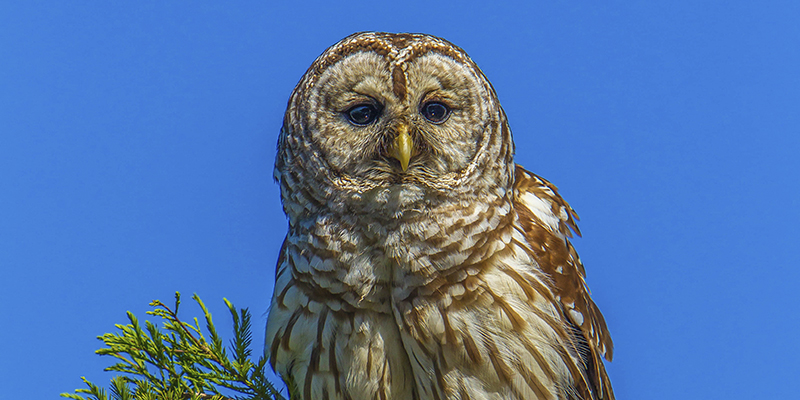 There, in mist nets the Martinezes had helped install an hour earlier, were two tiny northern saw-whet owls. Lured to the Carpenter St. Croix Valley Nature Center in southern Washington County by a recording of a male saw-whet owl’s call, the birds peered out at them. Each was about the size of a robin.

“Fourth time’s the charm,” said Sonia Martinez, a volunteer bander with Project Owlnet, a nationwide grassroots banding project to determine the timing, intensity and pace of migration of saw-whet owls.

As Martinez worked to transfer the first owl into a drawstring cotton bag, Jennifer Vieth, the executive director of the nature center, started untangling the second.

“This little stinker was not going to get caught,” Vieth said, as she worked to free its tiny talons and wings from the nearly invisible net. “You have to reverse the process of how it got in. It’s just like untangling a necklace. You want to do it really carefully because it’s a living creature.”

Project Owlnet was founded in 1994 by ecologist David Brinker of the Maryland Department of Natural Resources. Since then, the project has grown from five cooperating saw-whet owl banding stations in Maryland to a network of more than 125 in the U.S., Canada and Mexico. Project Owlnet volunteers and researchers annually catch thousands of migrating owls and take various measurements assessing each owl’s weight, size, age and gender, the St. Paul Pioneer Press reported.

Inside the nature center’s administrative building, Martinez and Vieth weighed each owl, still in its respective bag, on a small digital scale set up on a large wooden conference table. Keeping the owls contained in the dark bags helps them remain “nice and calm,” Vieth said.

After its weight — 83 grams, or just under 3 ounces — was recorded, Vieth gently removed her owl and banded its leg with a small circular piece of metal engraved with a number and the U.S. Bird Banding Lab’s website address.

Then, cradling it in her lap, she felt its keel — which Vieth likened to “your Thanksgiving turkey white-meat area” — to determine whether it was thin, obese or somewhere in between.

“This is a 3,” she said, measuring it with her index and middle fingers and blowing on its chest. “They can range anywhere from 0 to 4. Three is healthy.”

Measuring the tiny owl’s wing chord involved taking a small metal ruler and holding it alongside its folded wing — from the bend of the wing to the tip of its longest feather.

“You don’t measure the span because you don’t want to stress them out,” Vieth said. “This is an easy measurement to take: The wing is in its natural position, and it’s a good indicator.”

After turning off the overhead lights in the room, Isabel, 13, used a small flashlight to illuminate the owl’s eyes and matched the color of its bright-yellow iris to a Benjamin Moore paint sample. In addition to collecting data for Project Owlnet, the women are working on a collaborative Purdue University eye-color study.

“I think they’re Abstracta,” Isabel said, referring to Benjamin Moore Classic Color No. 322. “I really like that one. It’s interesting because their eyes are so different — some of them are really bright yellow, and some are really dark.”

Vieth used an ultraviolet light to examine the underside of the owl’s feathers to determine its age. “New feathers fluoresce,” she said. “As the feathers age, they get duller. A hatch-year bird has all new feathers and is all pink. Older birds replace some of the worn feathers, so they have a mix of pink feathers and duller feathers.”

Isabel, an eighth-grader at Cottage Grove Middle School, was given the honor of naming the bird. She christened her Belladonna, a nod to Belladonna Baggins, the mother of Bilbo Baggins in “The Hobbit,” the book she is currently reading.

After all the data were collected and recorded in a three-ring binder, the owl was placed in a small white cardboard box marked “Special Owl Box No. 2 — Do Not Recycle” and left to sit on the building’s back stoop for 15 minutes.

“We want to make sure their eyes are adjusted to the dark before we release them,” Vieth said. “It’s just to be super-careful. You know how when people are taking pictures, you get that flash blindness? You don’t want them flying off and not seeing the big barred owl in the tree and getting eaten because they can’t see right.”

When it was time, Martinez slowly nudged the lid open. The owl peeked over the side and flew off.

“Just don’t go back into the net again,” Martinez told it as it settled on the branch of a nearby spruce tree.

After a slow start, last week’s event turned out to be a banner night for saw-whet owls. The women collected 10 owls, the most so far this year at the Carpenter Nature Center, located near the confluence of the St. Croix and Mississippi rivers.

The most was 16 owls in one night. Some nights, they haven’t gotten any.

“Oh, yes, we’ve been shut out,” Vieth said. “One year we got three owls all season, but no data is still data in the world of research.

“It just depends on population levels and how excited they are about that really attractive tooting call, which sounds like a truck backing up,” she said. “Sometimes as you’re taking one out of the net, another will fly into the net right next to you. That’s super-cool that they don’t care that you’re standing there.”

The Martinezes volunteer at Carpenter two or three nights a week during owl-migration season.

“It kind of depends on everybody’s schedules,” said Sonia Martinez, an accountant. “We’ll stay out as long as we’re getting birds. The first night we were here, we stayed until about midnight.”

It turns out male saw-whet owls are smaller than females, “so if it’s under 85, you most likely have a male,” Vieth said. “If it’s over 100 grams, you don’t even have to guess — either that, or it just ate a really, really big mouse.”

The women recorded one male, one unknown and eight females. Among the names bestowed by Isabel: Bubba, Cleo, Emily, Myrtle, Belle, Holly, Wood and Shire.

This is the seventh year volunteers at Carpenter have participated in Project Owlnet.

Two weeks ago, a saw-whet owl banded at Carpenter last fall flew into a net of a fellow Project Owlnet researcher at Belle Isle Marsh Reservation in East Boston, Massachusetts, a journey of more than 1,400 miles.

The owl’s cross-country flight is “yet more evidence of how interconnected we all are,” Vieth wrote in a Facebook post after she learned the news. “She was not very big, only a 2 on her keel score, and she weighed just 92.5 grams. Releasing her into the darkness that evening, I am certain I wondered if she would survive her journey. I always wonder — and hope.”

Vieth, director of Carpenter Nature Center since 2013, has been researching birds for 30 years. A native of Canada, she started as a summer assistant on a snow-goose project in La Perouse Bay, Manitoba, while studying at Queens University in Kingston, Ontario. She came to Carpenter Nature Center in 2005 after stints at The Raptor Center at the University of Minnesota and at the World Bird Sanctuary.

Birds banded at Carpenter have turned up in Alaska, Venezuela and British Columbia, she said. “Birds connect us,” she said. “We share our birds.”

The owl-banding season at Carpenter generally runs from Oct. 1 through Nov. 15.

“Owls may still be moving south after that, but, for our researchers, you want to be able to get the owl out of the net really quickly and easily, and if your fingers are frozen, it doesn’t work,” she said. “From capture to banding to letting go, our goal is less than 15 minutes.”

Most of the owls banded so far this year have been older owls, which is unusual, Vieth said. “With the warm weather, the youngsters aren’t migrating as early as the oldsters,” she said. “That’s kind of cool. The old birds are, like, ‘I’d like to head back,’ and the young birds are like, ‘Hey, it’s nice here. I’ll hang around a little longer.’ We haven’t seen that before.”

Vieth said she loves getting middle-of-the-night texts from researchers reporting that a bird banded at Carpenter has turned up safe somewhere else. Likewise, she likes to be the one to share the news with fellow birders.

“We’ve caught quite a few that have already been banded,” she said. “It’s like fishing in the night, and then you’re getting these golden tickets. It’s really cool when they already have jewelry on.”

By tracking saw-whet owls, who “tend to be pretty route-loyal,” researchers are filling in “some of the mystery dots between where they breed and where they might roost in the winter,” Vieth said.

The owls need safe habitats along their routes in order to survive and reproduce, according to Vieth.

“Just think of how far they travel,” she said. “It’s tricky enough with natural predators and diseases when you are covering thousands of miles each spring and fall. When there’s habitat loss, and humans introduce new challenges like reflective windows, cars, mouse poison, it gets even tougher to make it as a tiny migratory owl.

“This is an amazing story of scientific collaboration and hope,” she said. “I just love how these volunteers and researchers are working to unravel the mystery of the owl’s life cycle, so we can make a difference in their world.”