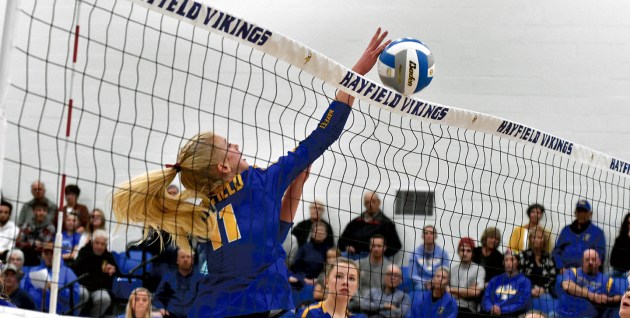 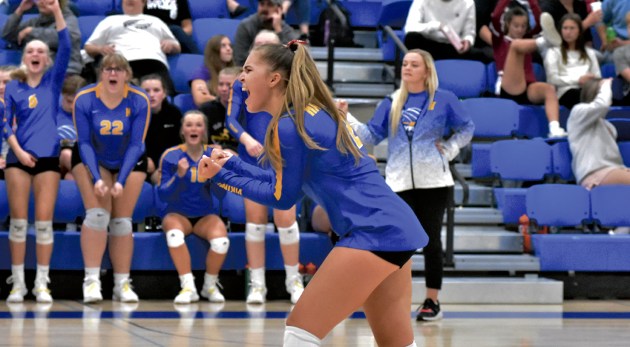 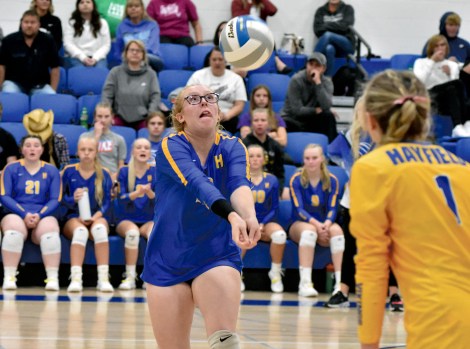 Anna Bamlet moves in to make a play on the ball for Hayfield against Triton Monday. Rocky Hulne/sports@austindailyherald.com 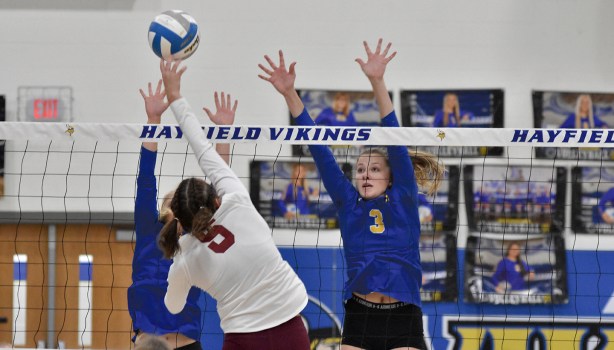 The Vikings (13-8 overall) cruised to a win in the first game, but the Cobras (4-16 overall) hung with them in the second game. Hayfield pulled within 24-23 when Reese Bauman put together back-to-back kills, but it wasn’t enough.

Baumann, who had 17 kills, found her edge again in the third game, where the Vikings closed things out on a 15-7 burst.

“They challenged us a lot,” Hayfield head coach Johanna Kruger said. “We haven’t had a practice since Wednesday and we were kind of out of commission. The little things added up to silly mistakes, but we were able to control the game.”

The final game was tied at 6-6 early on, but Hayfield was able to slowly pull away. Bauman had a big kill to make it 20-13.

Hayfield senior McKenna Chick racked up 17 digs on senior night for the Vikings. Chick and Hayfield’s other seniors have had a strange run in high school sports as there were no volleyball playoffs in 2020 due to COVID-19.

“Last year was sad. We didn’t get a full season and it’s been fun to have everyone in the gym this year. We’ve had so much energy and there was a lot of energy tonight,” Chick said. “We just had to be ready for every ball to come over. We just had to put the ball back over and hope for the best.”

Hayfield senior Anna Bamlet added 14 set assists and 12 digs as she put together a solid effort. Bamlet said the Vikings are finding their motivation as the season is starting to wind down.

“We’ve come in every day with a purpose,” Bamlet said. “We keep in mind that we’re playing for each other, coach Jo and everyone else who comes and sees us.”

Hayfield will play in the Goodhue Invite Saturday and will close out its regular season when it hosts Faribault Bethlehem Academy at 7:15 p.m. on Oct. 18.

“We’re looking to make practice intense and treat each game like it’s our last. Our next matches are our biggest ones of the year,” Kruger said.