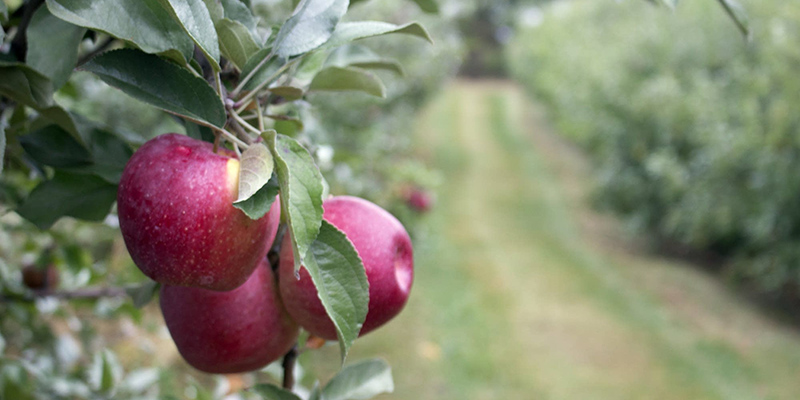 Apples are ready to be picked and eaten at Croix Farm Orchard in Hastings, Minnesota, Thursday. Carly Quast/MPR News

The summer drought was rough for some Minnesota farmers, especially Joe Schroeder.

As owner of Wood’s Edge Apples in Buffalo, Minn., he only saw 1 1/4 inches of rain between June, July and August.

So he ran his trickle irrigation system all day every day. The system was designed to be a supplemental water source, since the farm wasn’t getting the moisture it needed to produce crops as usual. And because apples are largely made of water, the lack of precipitation this year proved challenging.

Schroeder tried to order more parts to make a stronger irrigation system, but due to extreme backlogging, they wouldn’t have arrived until after they were needed.

“We did what we could given the limited resources we had,” Schroeder said. “There wasn’t a whole lot else we could do on that time frame to react.”

But it could have been worse. While Wood’s Edge Apples lost some fruit and pumpkins this year, Schroder estimated that if he had not used the irrigation system as he did, he likely would have lost an additional 30 to 40 percent of his crop.

Schroeder and his farm are not alone. Farmers across the state were hit hard by the summer drought, and it’s lingering impacts are now showing up at orchards and pumpkin patches across the state.

This fall at Wood’s Edge Apples, it’s mostly business as usual and families can still pick their own goods. But customers should expect the farm’s picking season to end about two weeks earlier than usual due to a smaller apple supply.

The summer of drought

For most of Minnesota, the summer drought was the worst the state had seen in 10 to 30 years. And while the entire state was impacted, central and northeastern Minnesota were hit the hardest.

At the end of June, 10 percent of the state was in “severe drought,” but that jumped to 72 percent toward the end of July. By August, portions of northwestern and north-central Minnesota were in “exceptional drought,” which the Department of Natural Resources’ State Climatology Office noted was the first time any part of Minnesota had reached drought levels that severe during the 21-year-history of the U.S. Drought Monitor.

Annie Klodd, a University of Minnesota statewide extension educator for fruit and vegetable production, said the drought’s impact was extremely variable from farm to farm. Some saw no consequences while others noticed significantly reduced yield and fruit size or quality.

“How significant the impact of the drought on yield this year will depend on how much rain a person received, when they got the rain, what soil types they have and what crop maturity and genetics were grown,” said Lizabeth Stahl, extension educator for crops.

But those aren’t the only defining factors.

For apple orchards, those with older trees tended to handle the droughts better. This is because well-established trees have strong, deep rooted systems that consume water better than younger trees.

Irrigation systems also played a role in determining the drought’s severity. In general, irrigated farms were not as largely impacted by drought.

Jeff Leadholm can attest to this. As owner of Croix Farm Orchard in Hastings, he turned on his farm’s dripline irrigation system in mid-June for the first time in nearly eight years.

“Basically, you’re putting water directly to the root system of the tree, so you’re not losing any evaporation,” Leadholm said. “It takes less water to feed the trees.”

This helped Croix Farm Orchard immensely, and as far as drought issues go, it was essentially a “nonissue” for Leadholm.

Could the impact spill into next year — and beyond?

Although it is somewhat unpredictable, the summer’s drought impacts could last beyond just this year.

Rick Pawelk, owner of LuceLine Orchard in Watertown, said his family has smaller apples this year than what he usually sees. He worries that there could potentially be even greater impacts in one or two years.

“Apple trees form from the buds for next year’s fruit in the previous summer,” said Klodd. “So when we have a very hot, dry June and July, it can sometimes decrease the following year’s apple yield.”