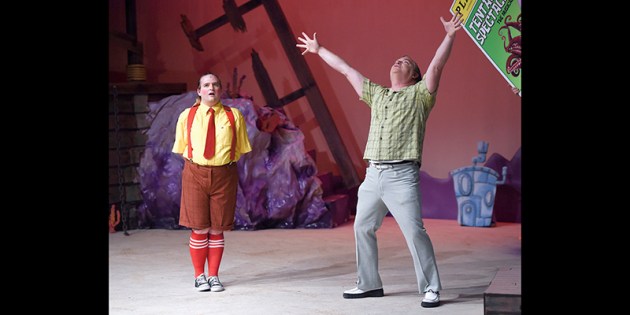 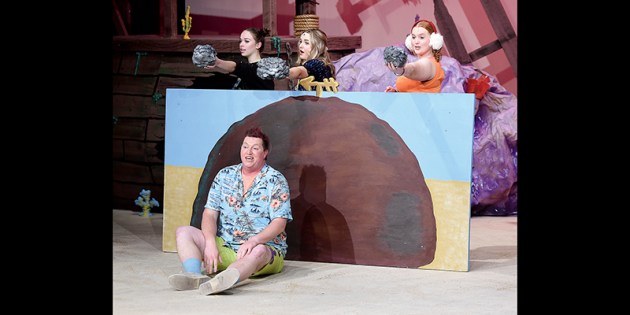 Jake Gustine as Patrick Star rehearses a scene for the upcoming Riverland Theatre presentation of “The SpongeBob Musical.” Eric Johnson/photodesk@austindailyherald.com 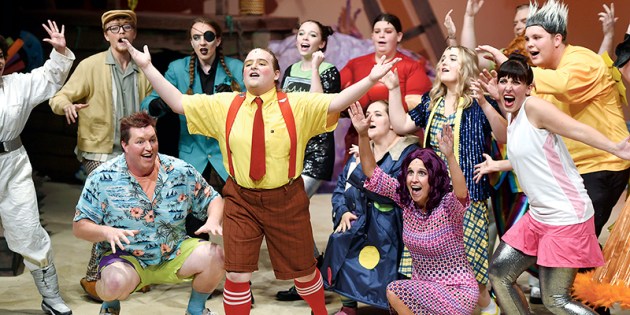 SpongeBob SquarePants, Squidward, Patrick, Sandy, Plankton, Mr. Krabs, and all the familiar denizens of Bikini Bottom face the total annihilation of their undersea world. Chaos erupts. Lives hang in the balance. And just when all hope seems lost, a most unexpected hero rises up and takes center stage, showing that the power of optimism really can save the world.

Based on the beloved animated series and featuring a score from the biggest names in pop music, “The SpongeBob Musical” is based on the series by Stephen Hillenburg with a book by Kyle Jarrow and features original songs by Yolanda Adams, Steven Tyler and Joe Perry of Aerosmith, Sara Bareilles, Jonathan Coulton, Alex Ebert of Edward Sharpe & The Magnetic Zeros, The Flaming Lips, Lady A, Cyndi Lauper, John Legend, Panic! at the Disco, Plain White T’s, They Might Be Giants, T.I., and Songs by David Bowie, Tom Kenny & Andy Paley. Additional music is by Tom Kitt, additional lyrics by Jonathan Coulton, and the musical production was conceived by Tina Landau.

The show is appropriate for all ages.

“We are thrilled to be back performing live in our theatre, and ‘The SpongeBob Musical’ felt like the perfect show to kick off our season,” said Director Lindsey Duoos Williams. “It’s an uplifting story about friendship and how important it is to take care of each other in our communities. The show is a ton of fun, and both adults and children alike can enjoy it. Fans of “SpongeBob Squarepants” will love seeing all their favorite characters in a new story, but even if you’ve never seen an episode of the cartoon, you’ll still be able to enjoy the jokes and musical numbers.”

Performance times will be at 7 p.m. Oct. 13-16 and 2 p.m. Oct. 17. All performances will be held at the Frank W. Bridges Theatre, located in the East Building of Riverland Community College’s Austin campus.

COVID-19 safety precautions will be in place during the performances. Masks are required to be worn by all audience members, in accordance with the current Riverland Community College campus policy. Cast members are fully vaccinated and will be wearing masks when coming into close proximity to audience members.

Individual tickets to “The SpongeBob Musical” are $16 and can be purchased at www.riverland.edu/tickets 24 hours a day, seven days a week. The on campus box office will be open for in person sales in the theatre lobby one hour prior to each performance. Riverland students receive two free tickets with a valid student ID.