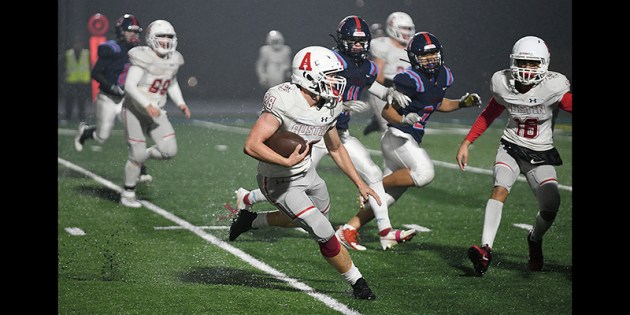 Austin's Joe Walker breaks into Albert Lea's secondary Wednesday night at Jim Gustaffson Field in Albert Lea. Walker scored the first three touchdowns of the game for the Packers in the win over the Tigers. Tyler Julson/Albert Lea Tribune 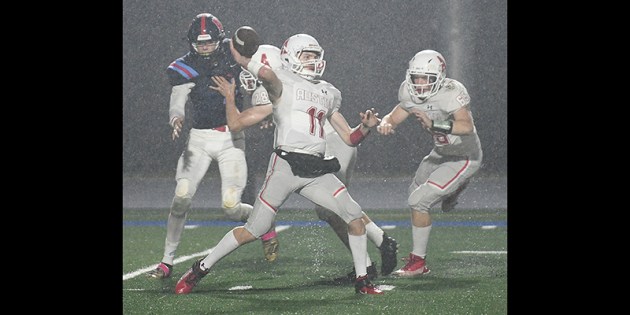 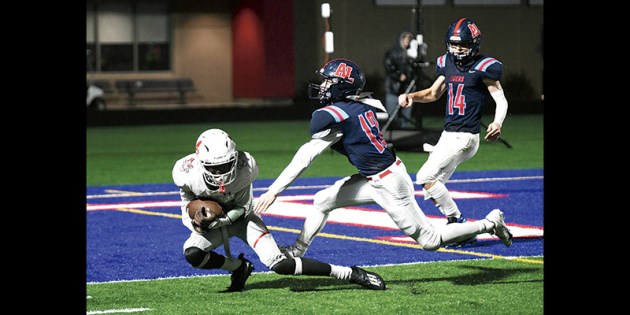 Manny Guy makes a catch near the endzone that would set up a one-yard touchdown for the Packers Wednesday night. Tyler Julson/Albert Lea Tribune 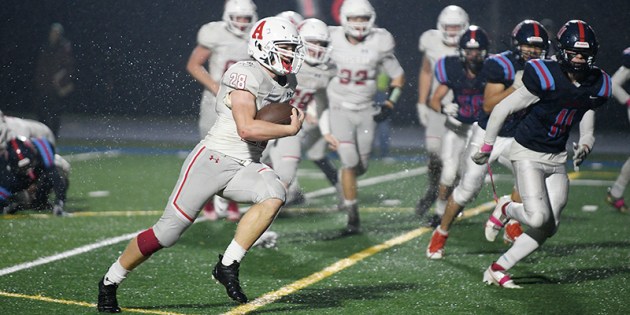 Joe Walker scampers in for one of his three frst half touchdowns Wednesday night in Albert Lea. Tyler Julson/Albert Lea Tribune

ALBERT LEA — The Austin football team had a huge offensive second quarter and its defense dominated throughout the night as it toppled the Tigers 45-6 to close out the regular season Wednesday night.

Austin put up 28 points in the second quarter to go up 28-0, led by Joseph Walker, who had three first half TD runs. Jack Lang found Manny Guy for a 13-yard TD pass with two seconds left in the first half.

AL (0-8 overall) didn’t record a first down until late in the first half and the Tigers didn’t have any plays of more than 15 yards, as they finished with 52 yards of total offense and three turnovers.

Austin freshman linebacker Sam Winkels recovered a fumble and he was in on several tackles in the win. Winkels began starting last week and also played in the 76-0 loss to Mankato West. The game is now starting to slow down for him.

“Tonight was monumental and if we can keep our confidence going, we can go further than we have in years past,” Winkels said. “It’s been hard going against all of these big guys. They’re strong and that just proves I’ve got to work harder in the weight room.”

While the Packers (1-7 overall) put up points, they also had 98 yards of penalties.

“We had a lot of crucial penalties on offense and we’ve got a lot of things to work on,” Austin head coach Ed Schmitt said. “We’re happy that we won, but disappointed in some of those things that we need to fix.”

Austin junior Isaac Stromlund had a pair of interceptions in the fourth quarter — including one for a 14-yard TD.

Austin junior Joe Ewing was six-for-six on PATs, he hit a 38-yard field goal and hauled in a 33-yard pass late in the game. This all came after Ewing had played for the Austin boys soccer team in the Section 1AA title game just 24 hours earlier in AL.

Austin will be the No. 6 seed in Section 1AAAAA and it will open the quarterfinals at Northfield, which beat Austin 21-20 in week one.

“We’ll need to bring our home effort on the road to Northfield and we’ll be good,” Schmitt said.