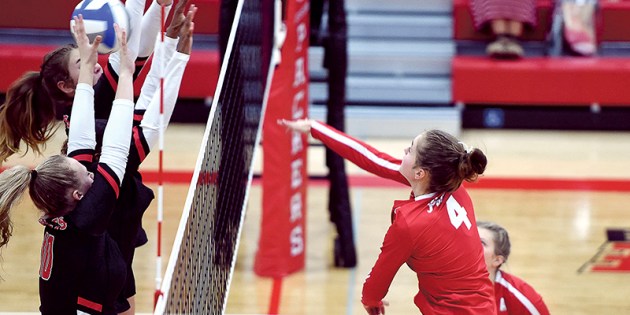 “We are so close. We played a good, solid match,” Austin head coach Jeremy Struck said. “There were a couple of mistakes on our side, but we’re there. I’m really excited to see this program going in the right direction. We have to learn how to play through adversity. We battled, and that’s all I can ask for.”

Austin was tied 15-15 in the final game, but the Rockets scored 10 of the last 13 points to run away with it. The match was Austin’s senior night and Kennedy Bell made some big plays in her last match in Packer Gym as she had 10 kills and 11 digs .

“It was so fun having the fans behind us tonight,” Bell said. “We were working really hard and our own energy kept us going. It’s hard, but we just have to keep on pushing. We just keep working.”

Austin trailed 8-1 to start the first game, but it held serve for much of the second game. Austin junior Peyton Manahan, who had 10 kills and 20 digs, gave the team a boost when she made a dig, while lying on the ground. That dig set up a kill by Thwol Othow. Hjelmen later struck down a point that put Austin up 21-17.

Austin has nine seniors on the roster and they have all been a help to Struck in his first year as head coach.

“They’ve been very welcoming and very supportive and open to what I’m trying to bring to this community,” Struck said. “The play has increased tenfold since June.”

The Packers will close out their regular season when they play at Mankato West at 7 p.m. Tuesday.