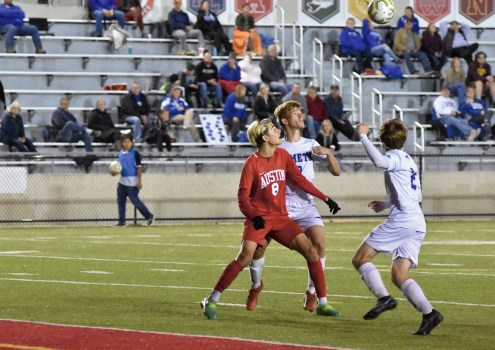 Austin’s Aidan Martinez positions himself on a high ball right before he scored a goal in Art Hass Stadium Tuesday. Rocky Hulne/sports@austindailyherald.com 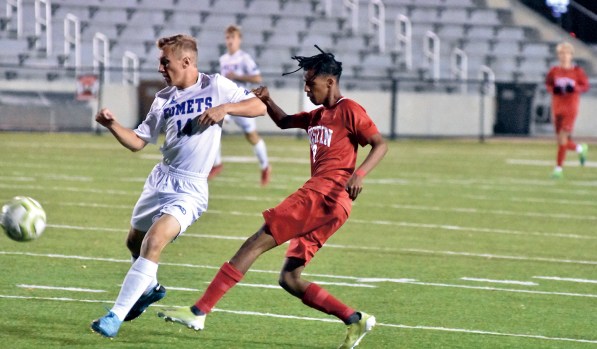 The Packers made some big plays in the first half and controlled the pace in the second half as they opened the Section 1AA Tournament with a 2-0 win over No. 5 Kasson-Mantorville in Art Hass Stadium.

Austin (7-6-3 overall) struck first when Aidan Martinez worked himself free from the right wing just four minutes into the game, but the KoMets (8-7-2 overall) nearly tied things up just minutes later when a free ball trickled past Austin keeper Logan Pederson, who finished with four saves. Luckily for the Packers, senior captain Jacob Broberg was there to sweep the opportunity away.

“You’ve got to react fast in that situation,” Broberg said. “In the first half we played much better than we did in the second half, where we relied more on our defense. We slowed it down.”

Austin head coach Jens Levisen admitted that Broberg’s play on that loose ball left him a little nervous, but Austin dominated possession the rest of the way as the Packers racked up 22 shots.

“That early play was enough to get the heart pumping a bit, but overall, we weren’t letting things through,” Levisen said. “We knew we didn’t want to come out slow. We wanted to make something happen early in the game and we did that. In the second half, they adapted and we didn’t maintain our passing. We still played well for all 80 minutes.”

Austin took a 2-0 lead when freshman Joel Thwang scored on a crossing pass that was deflected with 14:50 left in the first half. Thwang is a bit undersized up front, but he learned how to create space by watching Austin grad Henry Tolbert, who won the Minnesota Mr. Soccer Award last year.

“I have to make sure I talk to my teammates,” Thwang said. “I watched Henry last year and I learned a lot from him.”

The No. 4 seeded Packers, who have won four straight section titles, will play at No. 1 Winona at 7 p.m., Thursday.

Austin beat Winona 2-1 on Sept. 24 and the rematch should be a good one.