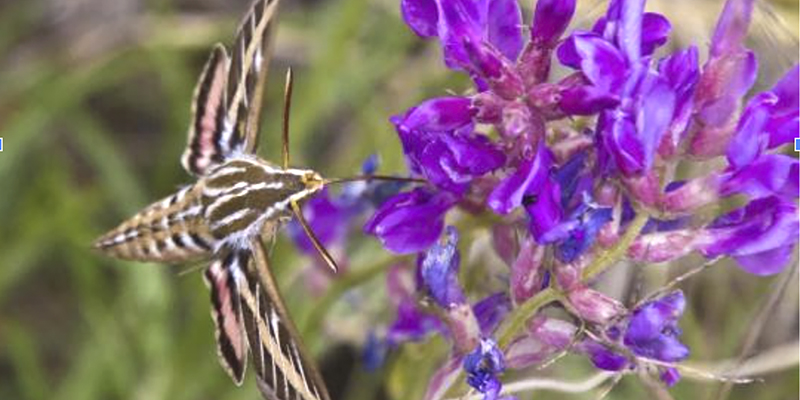 October is, without question, one of my favorite months of the year. October feels like the real beginning of autumn. In October, the air gets a bit crisper and nature takes notice. Leaves fade from green to red. Migratory birds make their travel plans. Creatures of all shapes and sizes prepare themselves for what’s to come. In October, we all savor the time we have left before the first snowfall, including hummingbird moths.

They got their common name because of their ability to beat their wings so rapidly that they are able to hover like a hummingbird-so rapidly in fact that they can fly at a speed of 35 miles per hour. They have often been mistaken for small hummingbirds at first glance because of this, and because of their long proboscis that resembles a hummingbird’s beak. The “sphinx” portion of their name comes from their caterpillar’s behavior-caterpillars are known to stick their heads in the air when concerned, resembling an Egyptian sphinx.

Hummingbird moths seem to prefer highly scented flowers, though aren’t very picky. They prefer columbine, evening primrose, honeysuckle, lilacs, petunias, and phlox to sip from. Because of their love for flowers, they tend to live in meadows, fields, and gardens.

Like other insects, the white-lined sphinx moth undergoes metamorphosis: beginning life as an egg, hatching into a larva (or a caterpillar), changing into a pupa, and then emerging in their final adult form. Females can lay hundreds of eggs, and lay their eggs on a variety of different kinds of plants. The larvae or caterpillars of white-lined sphinx moths vary greatly in color and have pointed orange horns on the back-end of their bodies. Several generations can be produced in a season, though there are typically two main broods that hatch from May to Oct.. Hummingbird moth caterpillars change into a pupa underground: unlike a butterfly that forms a cocoon, these moths take shelter under leaf litter or buried in the soil for about two to three weeks.

They have a large range and can be found throughout southern Canada, North America, and parts of northern Central America. Amazingly, there are over 125 different kinds of sphinx moths in the Sphingidae family in North America alone.

October at the Nature Center

Sign up for Christmas Crafts class is open online