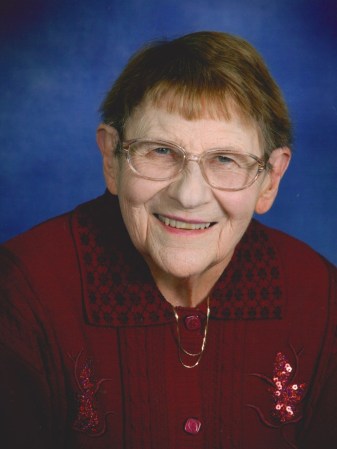 Margaret Elizabeth (Brown) Hulst, of rural Waltham, Minnesota went home to be with the Lord, on Saturday, August 21, 2021 at Legacy Assisted Living in Brownsdale, MN where she had lived since November of 2019.

Margaret graduated from Mason City High School in 1949, and married Allister Carol Hulst on September 30, 1951, at Rockwell, Iowa in the Lutheran Church. They lived in 3 different apartments/homes in Mason City for 6 years. (Al moved them once while she was in the hospital giving birth to Greg in January 1953.) The couple moved to Minnesota in August 1957…to the farm at 32130 State Hwy 56, Waltham, MN. They moved one last time, March 1987 to a farm at 57916 – 320th Street, Waltham, MN.

Margaret and Al had one son born on January 17th, 1953. Margaret retired from NW Bell Company in January 1984 after 30 years and 10 months. Margaret was a longtime member of Bethlehem Free Methodist Church in Austin, MN. She taught Sunday School for MANY years! And loved every minute of it! Especially sharing duties with her longtime good friend, Darlene Gilbertson! They also were in charge of Christmas programs and Vacation Bible School for many years… and worked great together.

Margaret had a Special Love for Family and Friends… and First and Foremost, she loved her Lord and Savior! Her life “showed” it by the way she lived. She was Loving, Kind, Humble and Forgiving! Margaret was a wonderful wife, mother, grandma, aunt, and friend! She loved spending “time” with people, she loved traveling, fishing, family activities and Holidays! Margaret loved “watching/playing” with her grandchildren and great-grandkids! The coffee pot was on every morning for the farmers/neighbors that came almost every day (even after Al was gone)! Margaret always kept “busy” with something… cooking, baking, canning, making mints, making pickles, sewing, going to small group Bible Study, attending her “ding-a-ling” lunches (phone company ladies), reading (her Bible and other things), and writing in her Journal (EVERYDAY)!