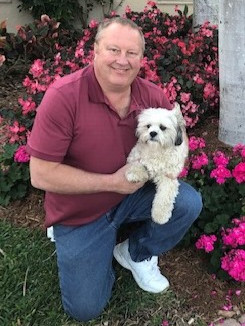 Jeff attended Southland High School, graduating in 1983. He was united in marriage with Jodi Bouska on June 21, 2008.

Jeff was the proud owner of Kinney Transportation LLC. He drove semi-truck all over the country with his dog, Turbo. The two of them always needed to be in sight of each other. Jeff always had his phone (aka: lifeline) with him at all times. He would post on Facebook live daily from his truck on his adventures of where life was taking him next. Always in the background of the post, he’d be playing all his favorite 80’s tunes and sometimes singing along. Wherever he went, he was always running into someone he knew.

When Jeff was at home, he spent time with his wife and their fur-babies: Turbo, Rachet, Overdrive, and Kona. He would love sitting in his chair, watching his favorite older TV shows like Gilligan’s Island, MASH, Star Trek, The Love Boat, and The Beverly Hillbillies.

Jeff had a love of life and was a strong Christian. He could carry on a conversation with anybody. He made friends quickly and was close with all of them long term. Jeff loved his family and friends with all his heart.

Some things Jeff liked to do over the years have been farming, going on the wheat harvest, playing cards, hanging out with friends and family, waterskiing, riding motorcycle, collecting Coca-Cola and Star Trek memorabilia, amongst many other things.

He was preceded in death by his dad, Charles Kinney.

Online condolences or memories may be left for Jeff’s family at Hindtfuneralhomes.com