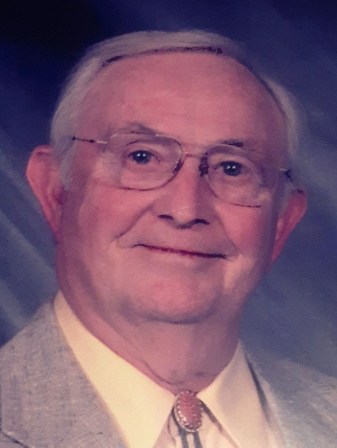 Shortly after Don’s return to the U.S., Donald Wolfe and Alberta Oldenburg were united in marriage on August 19, 1950, at the Church of Christ in Austin, MN. They adopted Renee then three years later adopted Rhonda.

Don worked at Hormel in Austin for several years. After retirement, Don liked staying busy so he had an engine repair business. Don was also an avid CB-er and enjoyed talking to his fellow CB friends around the world. In the 70s, Don invented and patented a CB radio antenna. Don was a member of the Austin Police Auxiliary in the 70s.

When the girls were young, their popup camper seemed like quite a luxury in those days and they had many happy memories traveling to many different locations. Don and Alberta later had many fun years traveling in their motorhome. Their favorite location was Branson MO with their tiny toy poodle named Teddy.

Don attended the Austin Church of Christ where he enjoyed serving in a number of church functions.

One of Don’s passions was playing golf. He played in many tournaments over the years and has many trophies to show for it. Don could no longer walk 18 holes when he was in his 80s; however, as long as he had a golf cart, he was still able to play. Dad enjoyed playing golf at many popular golf courses around the nation but he also enjoyed his membership and the good folks at Adams Country Club in Adams, MN.

After his wife, Alberta, passed away in 2012, Dad formed a special relationship with a dear friend, Marilee (Marilyn) Patterson. Unfortunately, Marilee passed in 2016. They enjoyed four very special and fun years together.

Don (dad) spent the last eight months of his life at Lake Winona Manor, Winona, MN, where he had exceptional care. He couldn’t say enough good about “His People” as he called them when referring to staff. He had so many special nurses and caregivers. He had many special relationships and truly loved “His People”. There are too many names to mention and I would hate to leave anybody out but Sam (Samantha), Bridget, Sheri, Dar, Lisa, Stephanie, Saidi, were nurses often in the room when I (Rhonda) visited Dad. All of the staff were so very special to Dad.