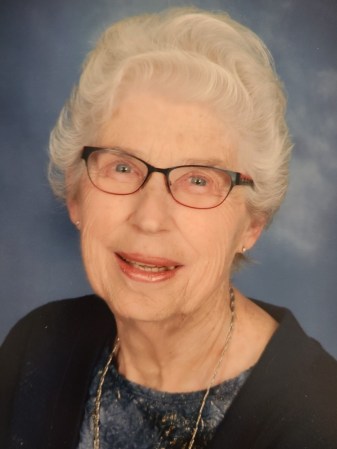 Clara was known to all for her joyful, fun-loving spirit and open nature. She welcomed family, friends, neighbors and tag-a-longs to her home and table where they knew they would always be greeted with a cup of coffee and a treat. Clara lived an unpretentious life, choosing a path of gratitude, humility and happiness. She and Greg played cards every day of their married life, often with their children, grandchildren and many friends; Clara was a talented seamstress and especially enjoyed sewing projects for others. She was a member of St. Columbanus Catholic Church where she volunteered in many capacities for over 50 years. Clara and Greg enjoyed travel and visited several states and countries. In her later years, Clara was especially grateful to re-connect with her siblings, playing cards online most evenings.

Clara held many jobs throughout her life, but excelled most as farmer’s wife, Mom and Grandma. She commandeered her household with strength, resourcefulness and mischief. Stories of her shenanigans marked the course of her life, even into her final days. Clara was a profoundly special woman; Clara will now enjoy the bounty of warmth, joy and love she nurtured in the beautiful garden of her life.

The family would like to extend a special and sincere thanks to the staff at Prairie Manor who cared for Clara with love and dignity.