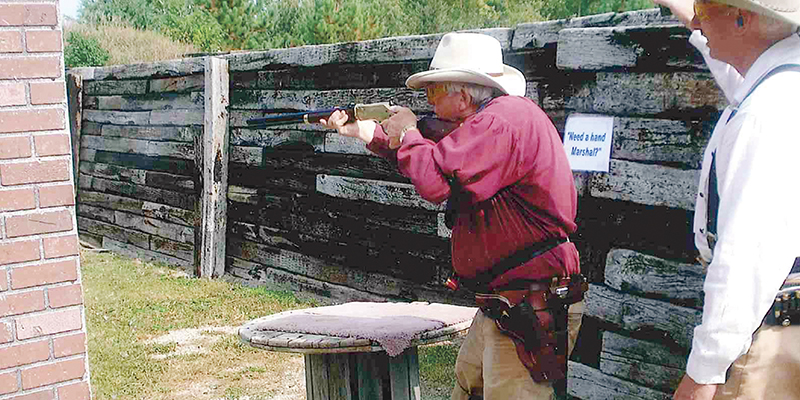 Rodney Friedrich takes aimå during a past competition. Photo provided

While some people like to go boating, hiking or attend a concert on the weekend, Rodney Friedrich of Austin likes to take a virtual trip back in time.

Whenever he gets a chance, Friedrich takes on the role of ‘Sam Pickett,’ a sharp shooter in the days of the Old West. Friedrich participates in a hobby called Cowboy Action Shooting, which is held at Ahlman’s gun shop in Morristown, Minnesota.

Friedrich took on the hobby about 20 years ago after he found out about it in the pages of “Wild West” and “True West” magazines. Cowboy action shooting involves various participants going through an obstacle course that involves shooting at targets in Old West scenarios. 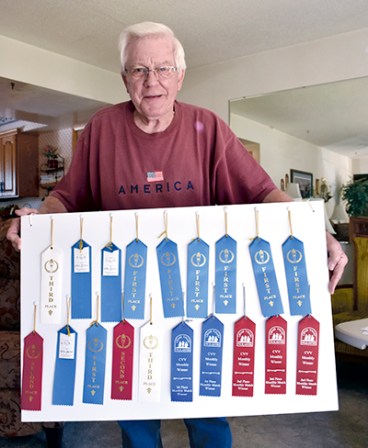 “Everyone has a gun cart to carry their rifle and ammunition on and you move, from stage to stage,” Friedrich said. “Every time you move you move into a different stage, it’s a different order. They’re playing mind games with you the whole time.”

The shooting events are held by the Single Action Shooter Society and it includes competitors from all over the United States. Frederich has one friend from Australia, who stores his guns in Texas before coming up to Minnesota to shoot.

Every shooter picks out their own name and some of the more clever ones include ‘Smiling Irish Mike,’ ‘Gunslinger Grace’ and ‘Outlaw Exterminator.’

It took Friedrich about 20 tries before he came up with his original name, as shooters get to keep their names forever.

“I have some friends that I shoot with where I don’t even know their real name or occupation,” Frieddrich said. “I only know their alias.”

The shooting stages are timed and Friedrich can now finish most of them in under 30 seconds. He has gone from an overwhelmed rookie to a multiple state champion.

“I always had last place locked up when I first started,” Friedrich said. “I shot for a few years and I asked some of the faster guys what I needed to practice. He gave me some hints and I just started practicing that stuff.”

Friedrich spent his winters in his basement with a card table and his guns in front of him. He worked on doing the little things, like using both hands on his quick draw, and his times got much faster.

“A different handling of the guns will make you faster in the game,” Friedrich said. “It also matters how fast you can shoot. Some of the lighter guns don’t have that recoil and are faster.”

While the Cowboy Action Shooting requires plenty of skill, it also brings a little flair as competitors dress up and spectators sometimes show up.

Sometimes families will show up and compete together. Shooters range from 10 years old to 80 years old.

Shooting has always come natural to Friedrich as he used to shoot squirrels and rabbits as a youth. Those rabbits and squirrels would end up being his meals, and Friedrich also learned to deer hunt as he grew older.

Competing in SASS has allowed Friedrich to continue his love of shooting, while also making lifelong bonds.

“I have a lot of friends that I have met through this and it’s always a good time when we get together,” Friedrich said.

There are also other forms of cowboy shooting, which include quick draw competitions and cowboy mountain shooting, where a cowboy rides a horse and shoots at balloons with blanks.