With fall college sports back on the menu after a one-year hiatus due  to COVID-19, area athletes are making their mark.

Austin grad Abel Gebrekiros is the top scorer at Division I Gardner-Webb as he has 12 points in 11 games.

Gebrekiros has scored four goals and added four assists, with a total of 10 shots on goal for the Runnin’ Bulldogs (2-8 overall).

Garcia, a freshman, had the Huskies’ first ever hat trick on Sunday.

Garcia has seven goals on the season, ranking him second in the GLIAC.

The Huskies are 3-6-1 overall in their first ever soccer season.

Austin grad Sam Hagan has three carries for seven yards in one game at the University of Minnesota-Morris (2-3 overall).

Blooming Prairie grad Gabe Hagen has four catches for 143 yards and one TD in five games in his first season with Minnesota State University in Mankato.

The Mavericks are 4-1 overall.

Austin grad Oliver Anderson has one tackle in one game for the Macs.

Blooming Prairie grad Payton Simon has one tackle in one game at Gustavus Adolphus.

Southland grad Ethan Forthun is the kicker for the Rochester Community and Technical College football team this season. In six games, he is four-for-seven on field goals, with a long of 37 yards and has made 27-of-31 of his extra point attempts.

The Yellowjackets are 4-2 overall.

Hayfield grad Carrie Rutledge has 18 kills and 113 digs for the University of Saint Thomas (2-12 overall) in the Tommies’ first season as a Division I team.

Rutledge had four digs against the Minnesota Gophers on Sept. 16. 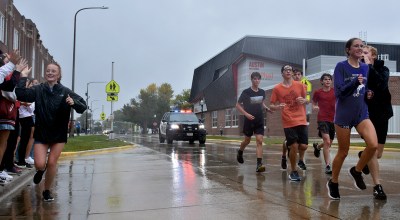