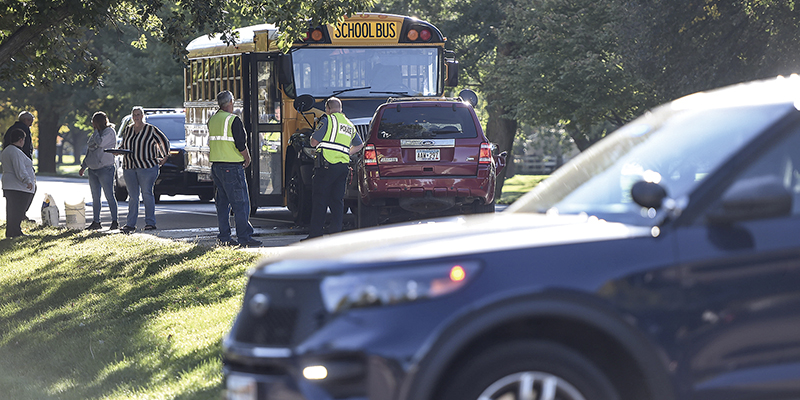 An Austin Police officer looks over the scene of a two-vehicle crash involving a bus that occurred earlier Thursday morning on West Oakland Avenue. Eric Johnson/photodesk@austindailyherald.com

According to Austin Police Capt. Todd Clennon, Austin police responded to a report of a two-vehicle accident with injuries at about 8:22 a.m. on Thursday in the 1800 block of West Oakland Avenue. Police learned that an eastbound 2011 Ford Escape driven by a 17-year-old male from Austin drifted across the center line, causing a head-on collision with a westbound Palmer school bus.

Prior to the crash, the bus driver observed the Escape in her lane of travel and was able to drastically reduce speed almost to a stop prior to the Escape colliding with it.

The Escape’s driver was transported to Mayo Clinic Health System-Austin by a private party for non-life threatening injuries. A juvenile male on the bus sustained minor injuries to his leg and face, but was not transported.

The Escape’s driver was cited for driving left of center and will be recommended to the State of Minnesota for a driver evaluation.

Both vehicles were towed from the scene.