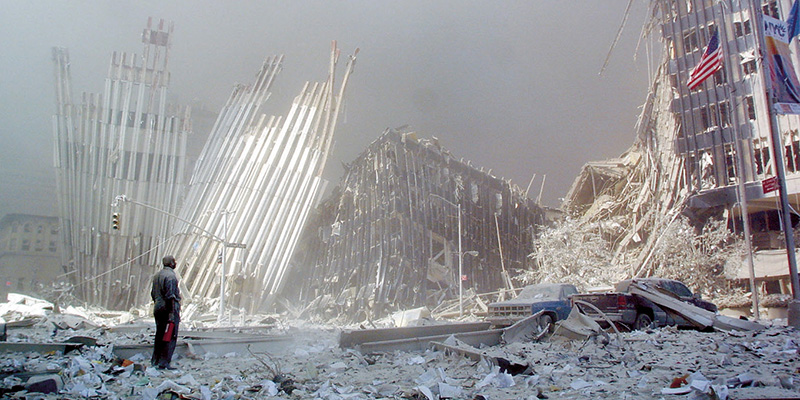 A man stands in the rubble and calls out asking if anyone needs help, after the collapse of the first World Trade Center Tower, Sept. 11, 2001, in New York. Two hijacked planes crashed into the twin towers, causing the collapse of both. AFP Photo Doug Kanter

Members of the Austin Daily Herald’s newsroom were at very different points in their lives when the terror attacks were carried out on the United States on Sept. 11, 2001. 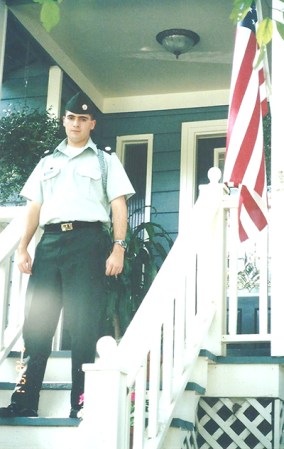 On the morning of Sept. 11, 2001, I was a freshman ROTC cadet at North Georgia College and State University (now the University of North Georgia) during the second week of classes. I was attending my Military Science class when one of the other cadets mentioned terrorists attacking the World Trade Center. The course instructors, Maj. Benjamin Sartain and Master Sgt. Christopher Warwick, said that there was not any proof yet that it was a terrorist attack, and since I remembered the 1993 terrorist bombing at the World Trade Center, I figured that was what had happened this time and thought nothing of it.

After class, I walked back to Gaillard Hall, the second battalion dorms (which were dubbed “barracks” despite each room being separated by walls) and went to my room on Echo Company hall. When I got to my room, I learned the severity of what had happened. My roommate and several other guys in my company were watching CNN. On screen were both towers with smoldering impact craters from the crashes.

The first thing I did was call my parents to make sure my father was not traveling on business. Fortunately he was not, having come home from a business trip the previous day. While I was on the phone, several guys in the room began swearing as the South Tower collapsed.

Since it was a military college, there were many Guardsmen and Reservists living on campus. Orders came down from the school’s military department that anyone in the National Guard or Reserves had to call their respective units to determine if they would need to report for duty. The announcement soon came that classes were cancelled for the rest of the day. Rumors even abounded that because we were a military college, we were a potential target and the campus might be evacuated, though I highly doubt the veracity that such an option was even considered.

The tension on campus was palpable as we tried to figure out what was next. We freshmen had completed a rigorous training period not two weeks earlier, and we were a bunch of gung-ho kids spoiling for a fight. At the time it seemed possible, though in reality the prospect of that was absurd as we were not in the Army, nor did we even know who the enemy was until later.

As the day wore on, the gravity of the situation really sank in. Classes resumed the following day, but I don’t think anyone paid attention to the instructors as our minds turned over and over, trying in vain to understand why.  That evening, a candlelight vigil was held on the drill field. All seven companies (A-F and Headquarters) stood in formation, surrounded on all sides by the civilian students. Crying could be heard, but not from within the ranks of the cadets; despite being torn up inside, we remained impassive as we were always ordered to do when in formation. For all of us in the Corps of Cadets, it was the most united we had ever been; all company rivalries were put aside and we stood together as one unit.

For many of my friends, whether they were in the Guard or Reserves or commissioned as officers upon graduation, the ensuing War on Terror left its mark. Some were activated for airport security in the days following the attacks, but others over time fought in Afghanistan.

One such individual was 2nd Lt. Jae Barclay, who was my squad leader when I was a freshman. On Aug. 19, 2006, Barclay’s Humvee was moving through Afghanistan’s Korangal Valley, dubbed the “Valley of Death,” when it struck several hidden anti-tank mines. Barclay was thrown from the vehicle, but his gunner and two other men were killed. On fire, Barclay ran to the rear of the formation in search of a medic as a firefight raged around him. He woke up four days later in a hospital bed at Fort Sam Houston, having suffered severe burns over 45% of his body. His story was featured in “Portraits of Courage: A Commander-in-Chief’s Tribute to America’s Warriors” by former President George W. Bush.

The first tower had already been struck when I was awoken by my good friend Tim on that early September morning.

After storming into my dorm room at UW-River Falls, he had a rushed look in his eyes and his voice was frantically trembling.

“Turn on the TV,” he instructed.

My half asleep eyes were mesmerized as I gazed at the sight of a burning tower. Before long, a second plane hit the second tower and my mind was racing.

Who could have done this?

Was it someone possessed by the devil?

Was it a missile?

Are we going to be under attack?

Needless to say, all of my classes were cancelled that day, which left the entire student body in a perpetual state of shock and fear. I had friends who were in the National Guard who were wondering if they would get called to serve, and I was wondering if we had a great War ahead of us.

It’s hard for anyone to imagine that kind of uncertainty unless you’ve lived it. I can say those feelings lasted for at least a week or two, until I started to learn about the details of the plot and how it came to be.

Even as time has passed, the event has left me with sadness. I’ll never forget the images of people jumping out of the buildings to exchange a fiery death for a death of falling. I’ll never forget the sight of those planes violently crashing into the sides of the towers on an otherwise sunny and beautiful morning.

I’ll also never forget my friend Tim, who actually passed away a few years ago. I can’t think of 9/11 without thinking of him and the loss is always apparent.

In those days, I was working for the Huron Plainsman in Huron, South Dakota, and my day didn’t start until 10 a.m., but the call from my editor brought me in closer to 8:30 a.m.

Betty Pore rarely raised her voice, so it was hard for me to really know why she was calling me earlier than normal, but after a short walk across the parking lot from where my apartment was conveniently located, I quickly understood why and it was one of the most surreal starts to my day that I will probably ever have.

Because it was in real time, we knew very little about what had happened, only that a plane flew into the side of one of the World Trade Center’s towers. But as we watched, we saw the second plane fly into the second tower, and without anybody really telling us, you just knew this was no accident. This was much, much different.

We started formulating a plan, but really being this far removed from the event, it’s hard to really remember what immediately came next for a small newsroom in a city of 18,000. I imagine we hashed out a plan on coverage as we were all put to work fairly quick. People were going to have thoughts and fears and it quickly became apparent that people were needing to talk.

My first assignment was to head over to a nearby church later in the afternoon to get pictures of people praying in a hastily assembled prayer vigil. By this time, both towers had collapsed, the Pentagon had been hit, and the fourth plane was brought down in a rural Pennsylvania field.

I say I can’t remember, but I wonder if I had any real thought at all. Things were moving so fast, and for the most part it was simply my job and one foot in front of the other.

The first vivid picture I remember was walking into the church and starting to take pictures. Heads were bowed and on more than a few faces there were tears. I remember feeling like an intruder in a moment of supreme pain for many, even so far removed from what was actually unfolding in New York, Washington, D.C. and Pennsylvania.

I suppose it’s cliche to think just how small I felt at the time in the shadow of something so depressingly historical. It was akin to the feeling of both shuttle disasters, but on a scale far greater.

The second thought that remains so vivid was the fire truck parked on Main Street, it’s ladder fully extended and below it the American flag waving in the strong breeze, I know it was strong, because the firefighters let me go to the top of the ladder to photograph the flag from above.

It wasn’t until me and a firefighter got to the top when the firefighter casually mentioned with a light smile, “Probably should have put a harness on you.” I didn’t even think about it and neither did he, but neither of us lamented on it. I would imagine he and the rest on the department had plenty of other things on their minds.

On that day, 343 firefighters died responding to the tragedy. In total 412 emergency workers died. Though I’m not one, I’ve been friends and acquaintances with plenty of firefighters over the years. My own cousin, Ben Johnson, is currently a firefighter in North Carolina, my dad is a retired volunteer firefighter and I, at one point, held a very strong conviction of becoming one myself.

I know the brotherhood of all firefighters. I never asked, but I know they felt the loss as deeply as if they had been working with them.

It was weird, but on that ladder I had my first real thought of the day that I can remember. A reflection. I knew America would be okay someday, but it would be altered in the wake of the innocence stripped from us. Our security was lost. It would take years, but America would be okay.