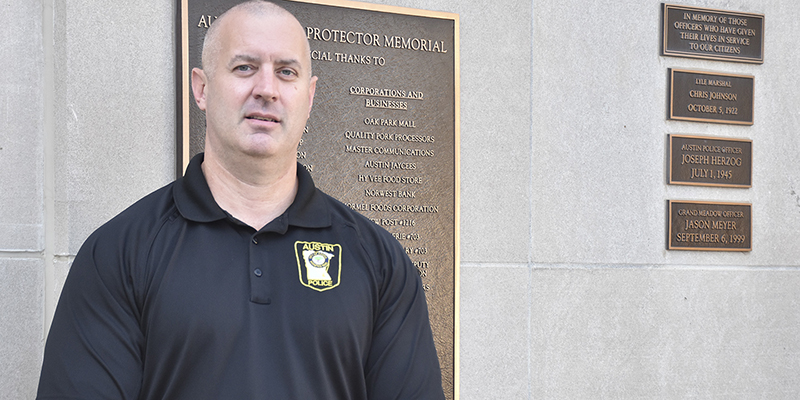 Austin Police Chief David McKichan, who has been on the force for 24 years, has seen the impact of 911 on policing and society over the past 24 years. Rocky Hulne/sports@austindailyherald.com

Austin Police Department Chief David McKichan has seen a lot in his 23 years on the police force, but he’s never seen another day like 9/11.

McKichan, who has been the chief for two and a half years, was up late and into the morning on a work project when he heard the news of the planes hitting the towers. After feeling concerned about the news of the first plane hitting, he knew something abnormal and intentional was going on when the second plane hit.

What followed still has McKichan and many other Americans in disbelief.

“Most people had an opportunity to see that second plane hit and no one watching it would’ve ever predicted that those incidents would’ve led to the complete collapse of those towers. You had two incredible plane events followed by the collapse of those towers, which from a loss of life perspective, was absolutely horrific,” McKichan said. “As time has gone on, those towers have been symbolic of what happened that day. But you also had the Pentagon hit and you had a plane crash that the passengers did keep from being used against any targets and that crashed in Pennsylvania. You really had five incredibility tragic, shocking events with the two planes hit, the towers collapsing, the pentagon is hit and plane crashes due to terrorism on that field in Pennsylvania. That’s something we’ve never seen and it resonates all these years later in the consciousness of all of those who witnessed it.”

He noted that the event, and many other harsh events, over the last 20 years have taken their toll on the mental state of the community and nation in general. However, he credits Austin for standing together and staying supportive over time.

“Austin has always been very supportive of law enforcement and that includes recently when things have played out perhaps negatively,” McKichan said. “Folks do recognize some of the risk that their firefighters, paramedics and officers are exposed to and that incident highlighted it. That played out, also in a time when we started to see mass shootings and you started to have all of these large, negative mass casualty events. That caused the mentality of ‘if you see something, say something.’”

The events of 9/11 will last in the memories of anyone who experienced it, but McKichan is mindful of keeping the focus on those who have made sacrifices in the immediate area over time.

“For us, 9/11 gives us the opportunity to think about not only the sacrifices that happened on that day, but it gives us a chance to look back regionally and locally at the officers, EMTs and care flight personnel that we’ve lost,” McKichan said. “That happens for all of us. We want to remember those who lost their life on 9/11, but in our profession there is always some loss of life tied to those young men and women going out and doing their duty and doing the things that keep our community safe.”