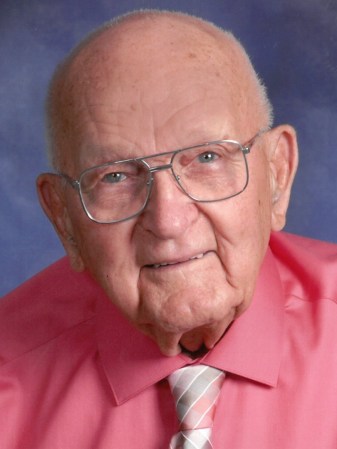 Merle Wilson McNutt, age 102 of Blooming Prairie, Minnesota, passed away Tuesday, September 14, 2021, at Heather Haus Assisted Living in Blooming Prairie. Merle was born November 14, 1918, in Archer, Iowa the son of Homer and Alice (Halstead) McNutt. He graduated from Sheldon High School in 1937. On December 14, 1942, Merle enlisted in the United States Navy and served during WWII until his honorable discharge in November of 1945. His service never took him overseas and he often said that he was one of the lucky ones. Merle was united in marriage to LaNelle Hosch on August 14, 1943, in Chicago, Illinois. To this union three children were born. The couple moved to Minnesota where they lived and farmed near Sargeant for 46 years. After retiring from farming, Merle worked as a crop insurance agent for many years. He enjoyed farming, traveling, and politics. He was a member of the Sargeant United Methodist Church and later the First Lutheran Church in Blooming Prairie. Merle also belonged to the Lions Club, the American Legion in Blooming Prairie, and the Hayfield American Legion. LaNelle’s health required a move to Prairie Manor Nursing Home in 2005 and Merle followed her there. He took up residence in the Heather Haus apartments where he made his home for the past 16 years.

Memorial services will be held at 11:00 a.m. on Saturday, October 2, 2021, at First Lutheran Church in Blooming Prairie with a luncheon to follow. Visitation will take place one hour prior to the service. Interment will be held at a later date in Fairview Cemetery, Hayfield, Minnesota. Memorials are preferred to First Lutheran Church or the Heather Haus to help with their courtyard project. It was Merle’s wish to donate his body to the Mayo Clinic’s Anatomical Bequest Program. Services are prearranged and performed by Worlein Blooming Prairie Funeral Home in Blooming Prairie. Condolences may be expressed to the family online at www.worlein.com.