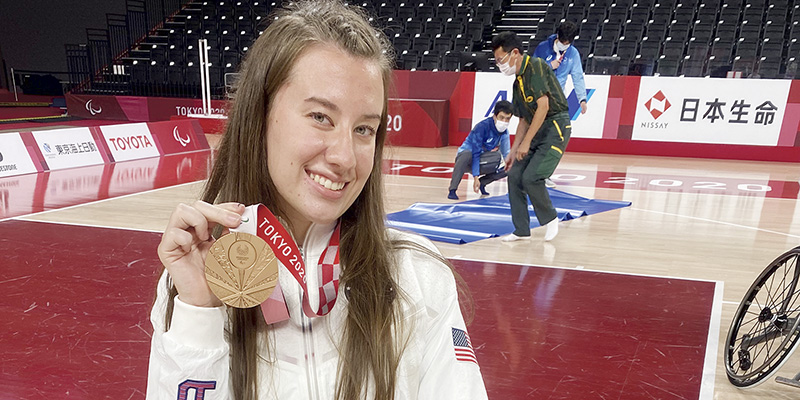 Abby Bauleke poses with her bronze metal as part of the United States national women’s wheelchair basketball team, which competed in this year’s Paralympics in Tokyo. Photo provided

If you were at the 2008 ceremony for The Hormel Institute’s expansion, then you probably remember Abby Bauleke speaking from her wheelchair about the good works and the hope the institute represents.

Bauleke, whose family has Austin roots, probably never would have guessed at the time that she would one day be a Paralympics medalist.

“Definitely not,” Abby said Thursday. She has recently returned to school at the University of Alabama from her time competing with the women’s basketball team at the 2021 Paralympic Games in Tokyo. She came back with a bronze medal after the USA defeated Germany 64-51. 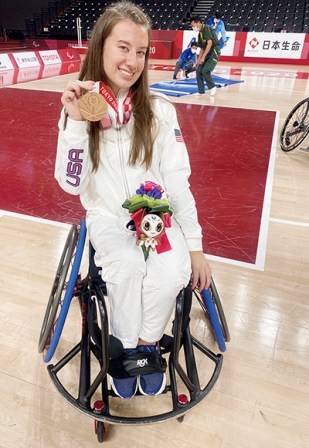 Abby Bauleke poses with her bronze metal as part of the United States national women’s wheelchair basketball team, which competed in this year’s Paralympics in Tokyo.
Photo provided

“I can’t even remember how old I was when I spoke,” Bauleke said, returning to her first speech in 2008. “I had no idea what was going to happen. At that point I was still pretty new to my chair and still adjusting to life.”

It was a life that no child should have to deal with at such a young age. Abby was diagnosed with leukemia in 2006 and started chemotherapy, but a rare complication developed just a month after Abby started the treatment, causing her paralysis and confining her to a wheelchair.

“Her body started fighting herself,” Abby’s mom Natalie Bauleke said. “That is why she is in the chair. At the beginning we had no idea if it would work its way out.”

The development placed the family in an unfortunate situation. Not only was Abby battling cancer, but she was also grappling with being paralyzed from the waist down.

It forced the family to focus on one thing first.

“We kind of had to put the paralysis on the back burner,” Natalie said. “It took two and a half years of chemo to save her life.”

While this struggle was challenging for someone so young, Natalie remembered more how her daughter handled the situation and how she approached life, particularly while speaking about her situation. This mature way of handling life’s curveball was evident during the second time she spoke for another of the Institute’s expansions in 2016.

“I just remember watching her and she wasn’t even quite into high school yet,” Natalie said. “She had an adult presence even then. She’s been very confident and well spoken from a very early age.”

For Abby’s part, this was just another step forward. In a weird way, being so young helped her come to terms with her situation. She never felt different from anybody else.

“It was obviously really different when you are paralyzed so young. I was only five,” Abby said, crediting her parents for helping her live a normal life as any other kid. “I didn’t know I was a whole lot different. My parents and everybody just made things so easy when I was young. I didn’t feel like my childhood was much different from anybody else. 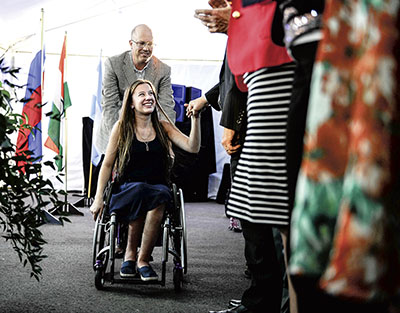 Abby Bauleke gets a fist-bump from someone in the audience after her speech in 2016 during The Hormel Institute’s expansion celebration and grand opening. Herald file photo

By all accounts, the Bauleke family is athletic, especially when it comes to basketball.

“My family is very much a basketball family,” Abby said. “My siblings played, dad played, my extended family…everybody in life played basketball. It’s always been something I’ve always been around.”

Wheelchair basketball has been around for years, having dated back to 1946 and the creation of the National Wheelchair Basketball Association.

Abby’s introduction started with a business trip by her dad.

“I started playing when I was 12,” Abby said. “I went to an adaptive sports camp in Denver. My dad used to travel there a lot for work and had seen an advertisement for adaptive sports.”

At that time, Abby was used to competitive sports, having been involved in sports alongside non-disabled kids. In her hometown of Savage, she was on a club swim team. But adaptive sports was about to open up a new world for her.

“I went out [to Denver] and that’s when they introduced a bunch of adaptive sports,” Abby said. “I hadn’t heard of wheelchair basketball at the time. That was really exciting.”

“I was so excited to be able to do the same thing as my friends were doing,” she added.

Her parents made sure Abby had every opportunity to play basketball, but early on they weren’t sure just how far the sport would take her. Neither was Abby.

“I don’t think she really thought of it as a path to college or the national team until she was a junior in high school,” Natalie said. “She started getting recruited.”

That was about the time the family learned that there are colleges that offer full-ride scholarships to para athletes for basketball. The University of Alabama offered one such scholarship and Abby jumped at the opportunity.

“That was amazing,” Abby said. “I had been going to summer camps at the University of Alabama for basketball ever since I was 14. The second I came here I said, ‘This is where I want to go to college.’”

The opportunity allowed Abby to keep playing a sport that she and her family adored.

“Being able to play at this level was so rewarding,” she said. “It was such an opportunity to keep playing the sport I love so much and all the resources down here…it’s amazing.”

But her road to Alabama was not the end of her journey. The stars weren’t done aligning yet.

However, just like the 2020 Olympics, the Paralympics suffered a postponement until 2021 at the hands of the COVID-19 pandemic. As a result, the women’s basketball team had three open slots as players dropped out.

“They just couldn’t do the training or the commitment,” Natalie said.

Abby, who had already played in Thailand as part of the national U23 team, was at a camp in Ohio when she heard the news that she had made the team.

“I’m not kidding, my jaw dropped,” Abby said. “It was such an exciting and overwhelming feeling honestly. I was reflecting on everything that was happening in my life and thinking where I ended up now and it was very emotional.”

However, there was still the reality of the pandemic, and like the Olympics, the Paralympics were to be held without fans. But once again, her family was there to support her, even from a distance. They sent letters along with her and even rented out a local bar and grill to watch her play.

“It was so much fun to watch,” Natalie said. “There was a lot more coverage than there ever has been before. You could find it easier. I’m very happy they are showing a lot more.”

Even from half a world away, Abby felt the support.

“After our first game, my whole family — with all of my cousins, 1,000 of us I swear — rented out a bar and grill in my hometown. I was seeing videos and pictures of every single person that I met in my life.”

“My family means so much to me, it was hard for them not being able to come,” Abby continued. “Seeing all the support from home… It was really great to see.”

Back at school now, Abby is once again on the court for the University of Alabama, but her eyes are already looking forward to the 2024 games in Paris.

“My goal is to keep going and go to Paris and basically try to play as long as I can,” Abby said.

And that’s the exact goal Abby feels others in her situation should have as well — not letting adversity define them.

“Just keep going honestly,” she said. “Things seem so crazy in the moment when bad things like that happen. I think it’s riding it out and knowing that things will get so much better. Whenever you want to do anything, you have to adapt. It’s a different road.”