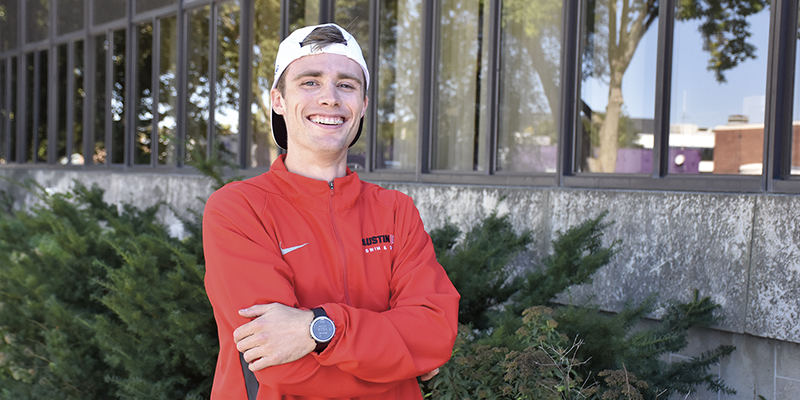 Austin grad Ben Walker may no longer be the member of a team, but he has taken his competitive edge to a new level.

Walker recently finished his first ever Ironman event, which saw him swim for 2.4 miles, ride his bicycle for 112 miles and run a full marathon of 26.2 miles. Walker, a 2016 AHS grad, was on the swimming and diving, cross country and track and field teams for the Packers. All of those sports helped him get through one of the toughest days of his life.

Walker had quite the trek just to get to the Ironman competition as he drove his car 1,543 miles to Cambridge, Maryland, by himself and also drove back on his own. He finished the event with a time of 10 hours, 29 minutes and 29 seconds, placing him seventh in the 18-24 male division and 71st overall out of 1,1692 competitors.

“I was in such a daze after I finished. It was awesome, but you were in go mode for so long that you wonder where you go next,” Walker said. “It’s a long event. It’s kind of like working on a long day on the job. You get used to putting in long hours on the bike.”

Walker was a sprint swimmer in high school, but he began taking on endurance events when he ran in a 50K mountain run in Reno, Nevada. It was 10 months ago when he decided to begin training for his first Iroman.

To do that, he used everything that he learned from his time as a Packer.

“Cross county was a huge help for this, swimming was useful and track and field is one of the best sports you can do,” Walker said. “All three of those sports helped me become what I am now as an athlete and I credit all of those coaches for making me what I am.”

Walker used a 70.3 mile half triathlon in Chisago Lakes to prepare for the Ironman event and that helped him focus on taking it one day at a time. He also had a good group of friends and family who supported him and pushed him during his training.

He quickly learned that the mentality of an Ironman event is far different than any other sport he had competed in before.

“For the first 70 percent of the race you’re not putting out a lot. In the last 30 percent, you’re probably giving more than you ever have in your life,” Walker said. “It’s a weird juxtaposition of a race. You have to be willing to go easy for a long time. You’re using different metabolic systems. The first half feels really easy on this type of distance. It shouldn’t feel hard. If it does, you’re going to get to the marathon and you won’t be able to maintain a pace.”

Walker is living in Austin and he works for the Austin Fire Department. Although his first Ironman was difficult, it certainly wasn’t discouraging.

“When’s the next one? It was such an experience that I can learn from,” Walker said. “I need to see how much better I can do in the next one. There is something about ‘sharpening the saw’ that is intriguing in such a long race. There’s so many places that you can improve and it’s intriguing and very fun.”