Front of the line 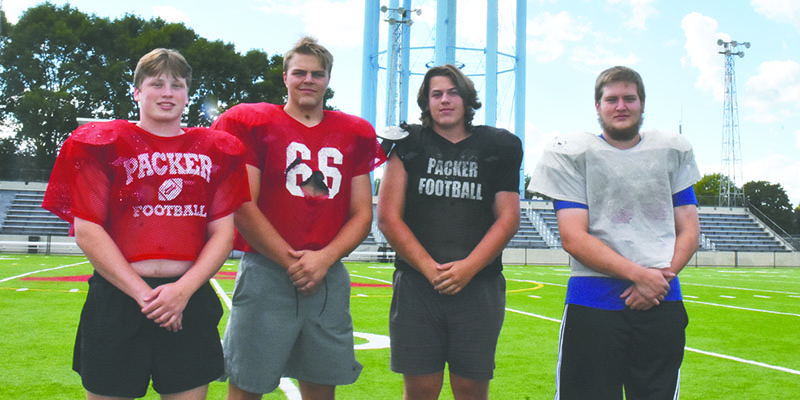 From left, Mike Haag, Andrew Sayles, Luke Owens and Calvin Ross have all elevated their game for the Packer offensive and defensive lines this season. Rocky Hulne/sports@austindailyherald.com

Packers have been providing a push up front

Austin junior Luke Owens has seen his older brothers Gavin and Ethan make big plays with the ball in their hands for the Austin football team, but Luke has had a much different path than them.

Instead of running free into the secondary and making big plays, Luke is in the middle of a pile of bodies on a regular basis, taking hits from all angles. It’s not a glamorous life, but it’s a life that he and fellow Austin linemen Andrew Sayles, Calvin Ross and Mike Haag have learned to love.

Sayles and Ross are serving as captains this season and they were both active with the speed and conditioning workouts in the dome over the past winter. They’ve encouraged others to join them in getting stronger and they sure don’t mind the bruises that come with mixing it up in the trenches.

Ross said it takes a specific mentality to survive on the line.

“You get hit a lot harder than the other guys do. You get really hard every play. Coach tells us every time we play that O line and D line is what wins games,” Ross said. “We put in a lot of hard work with lifting and conditioning this summer. We wanted to stay in shape for football. This is my last year playing so I wanted to go all out and try to do my best. As long as everybody does their job, we’ll get things right.”

Sayles said the Packers have a lot of chemistry up front and it helped the line develop as one of the strengths of this year’s team.

“I think we work well together,” he said. “We all know each other and we’ve played together for many years now. The effort has been great this year. It all depends on how much you want to push yourself.”

Despite having their positions set, the Packers on the line have stayed hungry to keep their starting spots. Haag said there is never time to let up.

“We all know each other really well and we’ve been working hard in practice,” he said. “Having the younger guys on the team, makes you push harder to keep your spot. We do a lot of work.”

Austin head coach Ed Schmitt told his players that they are probably never going to get the recognition that quarterbacks, running backs and wide receivers garner, but he knows the position up front often decides how far a team will go.

“Linemen aren’t going to be mentioned and it’s not a glory position,” Schmitt said. “I know firsthand because that’s what I played in high school, but we as coaches know who’s doing the job up front.”