The Mower County Board of Commissioners on Tuesday established a 3.9% proposed property tax levy for 2022.

At its meeting, commissioners also set the annual budget and levy public hearing for 6:30 p.m., Dec. 14, in the board chambers.

The proposed levy stays in line with what commissioners set earlier this month, but commissioners hope that they still have time to try and lower that number.

“Let’s work extremely hard to get that done,” Commissioner Jeff Baldus said. “I’m not happy with 3.9%. I understand why, but let’s just continue to see what we can do to get that down.”

A question mark remains hovering over negotiations with the City of Austin over maintaining 911 services and record keeping at the Law Enforcement Center.

“Does that take in consideration the dispatch expense situation, which is still being negotiated?” Commissioner Jerry Reinartz asked.

“This is kind of the worst case scenario,” CountyAdministrator Trish Harren answered.

Currently, the County and City split the $900,000 price tag, but the City recently came to the County earlier this year expressing a desire to negotiate a change in the arrangement to reflect situations in a majority of the state, where except for a few instances, the county funds 911 and records.

However, the late nature of the City’s intentions complicates the County’s own budgeting and if a satisfactory conclusion isn’t met then the levy increase would most likely stay at 3.9%.

The levy will be finalized in December of this year. 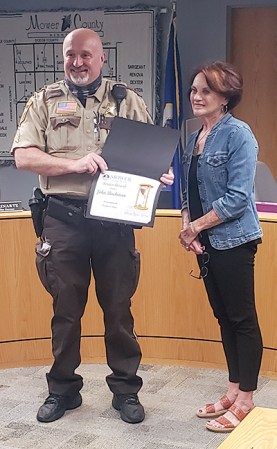 Retiring Mower County Sheriff’s Sgt. John Bachman was honored for 24 years at the department at Tuesday’s Mower County Board of Comissioners Meeting. Bachman is retiring after more than two decades with Mower County. Standing with him is Board Chair Polly Glynn. Eric Johnson/photodesk@austindailyherald.com

At the start of Tuesday’s meeting, the Board recognized Mower County Sgt. John Bachman, who is retiring after 24 years from the Sheriff’s Office, is retiring.

Members of the Sheriff’s Department, Mower County Attorney’s Office, Austin Police Department and the County Board all recognized Bachman’s service and lauded him for the effort he put in each and every day.

“It’s amazing when we have people step up and do the hard work and do it as long as John has,” Sheriff Steve Sandvik said. “You will be sorely missed, but absolutely a well-deserved retirement.”

Mower County Attorney Kristen Nelsen said that Bachman’s time in the courtroom lended a degree of safety each day.

“The times you’ve spent with us in the courtroom have been some of the safest times in my career,” Nelsen said. “Knowing John was in our corner, a step away, let us do our job better.”

Bachman said he was humbled by the adoration of his peers.

“It’s a little overwhelming actually,” he said. “I’ve been humbled and honored to serve the citizens of Mower County.”

• The board voted to approve a $1 increase to $6.50 per point in the solid waste service charge. The county is looking to generate approximately $150,000 in revenue to account for expenditures on things including a new bailer for the recycling center. The last time that was raised was 2019.

Points are used to help designate dwellings in the county and how much is charged.

• The board also approved the spending of $3.25 million in American Rescue Plan Act money from the federal government. The amount represents half of the $7.8 million total the county is set to receive, with the last half slated to come in next year.