Bruins look to get back in the hunt 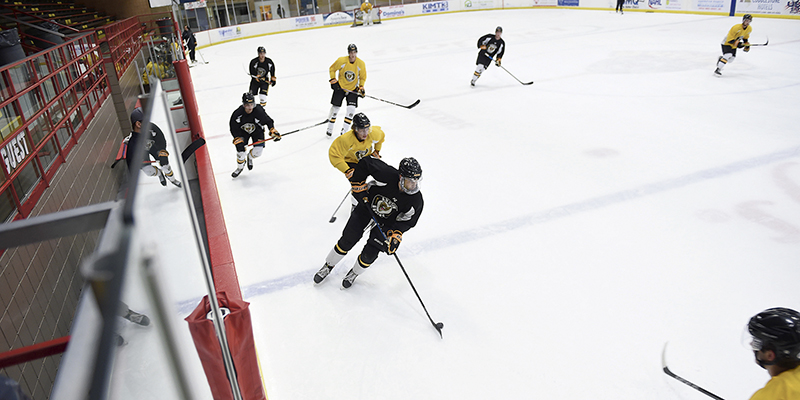 The Austin Bruins run through practice Thursday at Riverside Arena. Four games into the season and the Bruins are looking to continue the success they found in the Blaine Classic. Eric Johnson/photodesk@austindailyherald.com

The Austin Bruins are back on the ice and they’re hoping to get back to their winning ways.

After missing the playoffs due to COVID-19 in 2019-2020, and coming up two points short of the postseason in 2020-2021, Austin is looking to a mixture of veterans and young players to step up and take charge, especially after the Bruins went 3-1 to open the season at the NAHL Showcase.

“It’s going good so far. They’re gelling together really well and that’s important. It’s still real early, but I’m excited about the potential that we have,” Austin head coach Steve Howard said. “We weren’t satisfied with what happened last year and we want to make sure that we get back into the playoffs this year.”

The Bruins have a strong leader in fourth year forward Carson Riddle, who had nine points at the Showcase and was named NAHL Central Division Player of the Week. Riddle, a native of Holly, Michigan, has played 152 career games in Austin and has 81 career points.

Unfortunately for him and the Bruins, two of those seasons were slowed down by COVID-19 and Riverside wasn’t allowed to hold full crowds last season. This year, the crowds will be back and the atmosphere will be loud.

“We’re excited to play back in front of the fans. It’s going to be fun. We’ve got a pretty good team right now and it’s looking good. It’ll be nothing but up from here,” Riddle said. “We’ve got to stay on it the whole year. It’s a long season; it’s a tough season, but as long as we stick to the structure and the way we play, we’ll be fine. We click well right now and we’re all close. We’re a good all round team and we have every asset here.”

Alex Trombley, who is from Howell, Michigan, is another player with big NAHL experience as he spent the 2017-2018 season with the Bismarck Bobcats before joining the Bruins last season. He has scored 31 points in 64 career NAHL games.

Trombley is pumped to play in front of full crowds again this season.

“The key is for us all to stick together and that we all love each other like a family. We’ll go to battle for each other and we have to trust the system,” he said. “Every day you have to go out and compete. Nothing is given in this league and last year I thought we were too lackadaisical with our play. This year, we’re tightening everything up and hopefully we can make a run for the cup.”

Austin will also rely on Franklin Dovarny, Braidan Simmons-Fischer, and Liam Whitehouse, who the team acquired in a trade from the Johnstown Tomahawks. Hudson Hodges, who has a career record of 11-14 overall, returns as a veteran goalie, and rookie Nikola Goich will also contribute in the net.

“We have some guys that have been in our system for over a year and they understand the way we do things here,” Howard said. “A lot of these kids come from AAA and it’s becoming a year round sport. Our guys are accustomed to playing eight or nine months, it’s just a little bit of a different level. That’s what our veterans are for is to explain that we’re taking it one game at a time and we’re focusing on getting two points every time we step on the ice.”

The Bruins will host the Minot Minotauros at 7 p.m. Saturday.