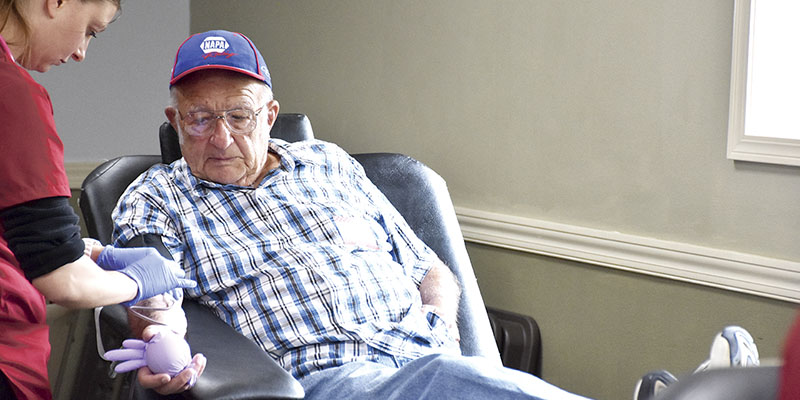 Father-son duo have made a combined 195 blood donations

GRAND MEADOW — When Leonard Babcock began to donate blood in the 1950s, he had no idea that he was starting something that would give back to many people in need over the next six decades.

Leonard, who has lived west of Racine for 50 years, recently gave his 95th blood donation to the Red Cross in Grand Meadow. If that wasn’t enough, Leonard’s son David was in the bed next to him giving his 100th blood donation.

Leonard has been donating for six decades and David began donating in 1978.

“It just feels good and it doesn’t hurt at all,” Leonard said. “Over the years, I’ve given a lot and I know it’s been a lot.”

David, who lives between Stewartville and Racine, has taken on driving Leonard to the appointments, which serve as quality father-son time. Most of his donations have taken place in Grand Meadow, Spring Valley and LeRoy. 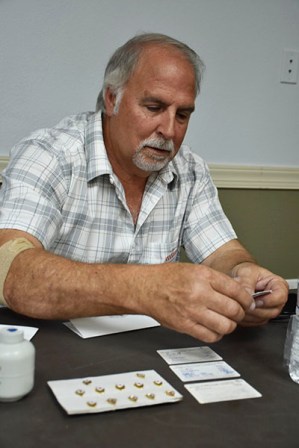 David Babcock displays all of his pins and cards from his 100 times of donating blood. Rocky Hulne/sports@austindailyherald.com

“It’s something you can do that’s simple, cheap and easy. Maybe you go to heaven for it,” David said. “I didn’t realize before how many people just can’t do it, because it gets in their head and they can’t see blood.”

David began with the goal of donating 10 gallons and once he reached that milestone, he stopped counting. Now that he’s reached 100 donations, he doesn’t plan on stopping any time soon.

“It’s better than sitting around doing nothing. We also go to the race track together on Saturdays,” David said. “ If you haven’t tried donating, give it a whirl. They’re always short on blood.”

The Babcock’s milestone is impressive because donors are only allowed to give blood once every 56 days, which means that it would take over 16 years for someone to reach 100 donations if they donated every possible time.