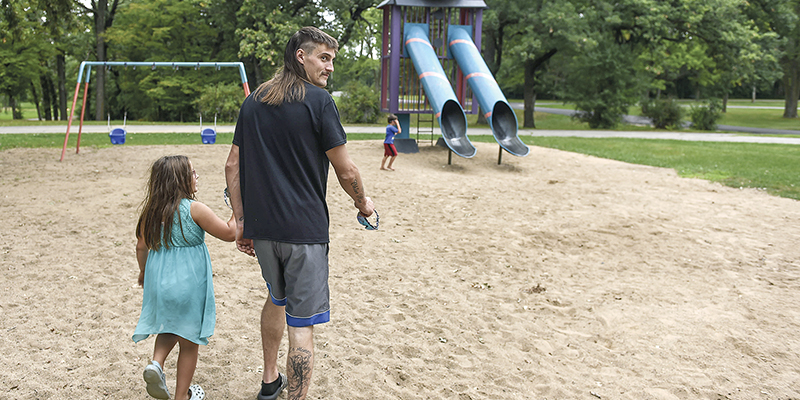 Curtis Wilson walks with his fiance’s daughter Chloe Steinbrink over to where Chloe’s brother Callen was playing at Todd Park last month. Wilson and his mullet, in full view, is a top 25 finalist in a national mullet contest. Eric Johnson/photodesk@austindailyherald.com

Wilson was taking part in the USA Mullet Champ Men’s Open Division and a chance to win $2,500 on the merits of his flowing hair style that harkened back to visions of the 1980s.

He was in the top 25 and after the final results he just missed making the top 10.

“I’m very happy with the results,” Wilson said via email. “Never did I ever think I would make it this far. It’s been awesome being known around town as the guy with the mullet and strangers coming up to you saying they voted. It’s pretty humbling.”

Wilson’s mullet was more than a chance to win some prize money. It was also a way to remember a family member who had passed away due to cancer.

“I lost an aunt to cancer three years ago,” he said prior to the contest’s end date. “I was bald, but I decided to grow the hair as a good way to remember her.”

Now, Wilson can look forward to his wedding to Cheyanne Steinbrink, but don’t think for an instant that the mullet is going away.

“She loves it more than I do,” Wilson had said. “I’m going to keep it until I go bald.”