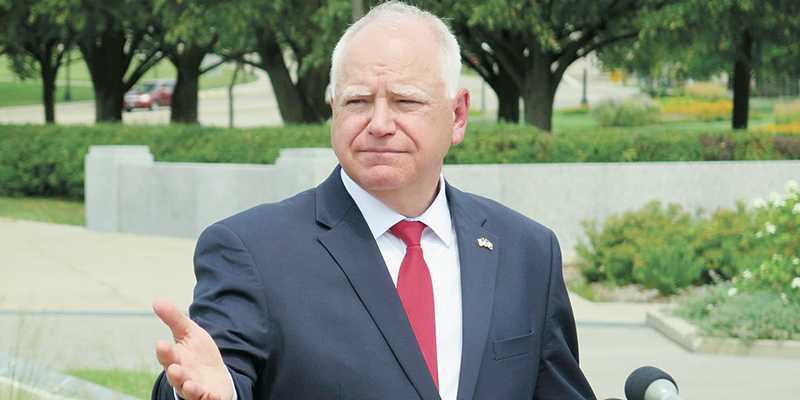 Gov. Tim Walz said Tuesday that he is considering a vaccine requirement for state employees as they return to offices and other workplaces. Tim Pugmire/MPR News

Gov. Tim Walz said Tuesday a vaccination requirement for Minnesota’s approximately 40,000 state workers is on the table as his administration negotiates a plan for the return of those employees to offices and other facilities throughout Minnesota.

Walz said he expects to announce a plan in the coming days.

Many state employees have been working from home for more than a year due to COVID-19 concerns, and the spread of the delta variant is giving some pause about returning.

Requirements for vaccinations and testing have been discussed, Walz said.

“We are right now in negotiations, if you will, of trying to come up with what is the best, safest way to make sure our employees can return, keeping themselves, their families and others safe,” the governor said.

Minnesota would not be alone. California, New York and Washington are among the states that have already announced vaccination requirements for state workers.

University of Minnesota officials said Monday all students will have to be vaccinated once the Food and Drug Administration grants final approval to the vaccine, which is expected soon.

Other colleges, school districts, health systems and local governments have also added various requirements as the delta variant has spread.

Walz said he is discussing vaccinations and other measures with state employee unions.

“We’re asking folks to be vaccinated when we return to the workplace,” he said. “If not, how are we making sure they’re tested?”

“Mandates are not the solution,” Gazelka said. “There are other options, such as working from home and distancing for those who choose to not be vaccinated. Vaccines are widely available for those who want them and are incredibly effective at preventing the spread and impact of COVID.

But a mandate is divisive and unproductive.”