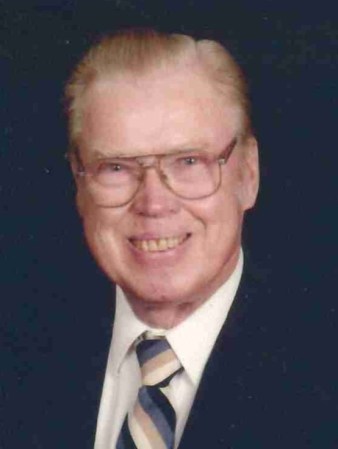 Vern was born on July 3, 1926 in Austin, Minnesota to Adelbert and Mae Barry. He grew up in Austin and graduated from St. Augustine/Pacelli High School and from St. John’s University in Collegeville, Minnesota.

Vern served in the US Navy as a Bridge Watchman, Quartermaster and Helmsman from 1944 to 1946 during World War II.

On June 14, 1958, Vern was married to Mary Ellen Rishavy at St. Augustine Catholic Church in Austin. The couple resided in Austin where he worked as a master electrician at the Hormel Company for over 40 years.

Vern was a member of St. Edwards Church, the Legion Color Guard, the Northwest Singers, the Austin Symphony Choir, card clubs and the Sterling Club. He was a lifetime member of the American Legion Post 91.

He was preceded in death by his parents, Mae and Adelbert; his brothers, Adelbert Jr. “Bud”, Lowell “Lewie” and his sisters, Bernadine, Loraine and Bonita “Bonnie”.

A funeral mass will be celebrated on Friday, August 13, 2021 at 11:00 am at St. Edwards Catholic Church in Austin, Minnesota with Father James Steffes officiating. Visitation will be on Thursday, August 12, 2021 from 6:00 to 8:00 pm at Mayer Funeral Home with a rosary service at 7:30 pm. Visitation will also be held one half hour prior to the service on Friday at St. Edwards Church.