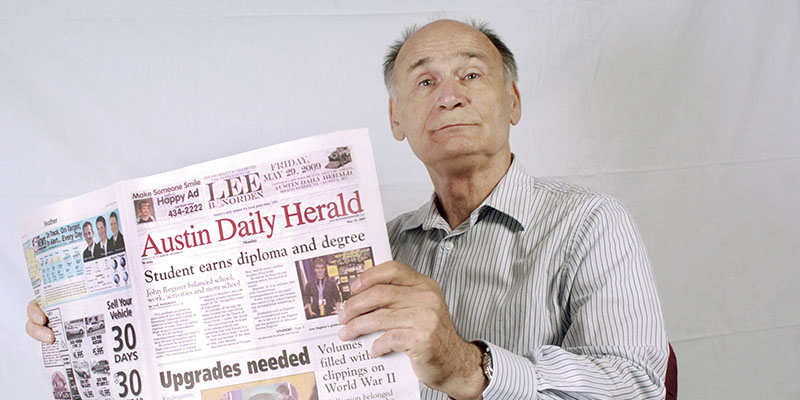 Former Austin Daily Herald reporter Lee Bonorden looks back at his years on the desk 10 years after he retired. Herald file photo

When news came to me from his son, Ryan, earlier this week that Lee Bonorden had been admitted to hospice, it was hard not to note the heavy coincidence of the Mower County Fair.

Lee lived for the fair and I dare say it was his favorite time of the year. For a man who seemingly knew 90% of the county, the fair was a playground of conversation and stories. He was in his element as he covered the six-day event like no other.

He would spend hours upon hours at the fair, taking pictures for a tab we ran in those days featuring 4-H ribbon winners and whatever fun story he could dig up.

However, it was hard to imagine how he found time to write all of these considering that each time I saw him at the fair, he was more often than not talking to someone, not about the fair or 4-H, but everything in between.

Unfortunately, this coincidence became sadder when the funeral notice for Lee came to the Herald on Tuesday. He died at 77.

Had you asked upon coming to Austin in April of 2004 if I would be writing this kind of column today, I would have been skeptical. Very soon after starting my position as photographer, reporter Matt Merritt informed me that, “Lee doesn’t like photographers.” It wasn’t just me though, and I shouldn’t take it personally. How on Earth was I not going to take this personally? Lee wasn’t even giving me a chance to provide reason to dislike me. More importantly, how was I going to work with the man? My desk was right next to his and, as we all are aware of by now, Lee was a talker — even if he didn’t like photographers — and he certainly didn’t refrain from giving you his opinion.

Even at that point, Lee wasn’t driving anymore. Health complications had left him with very limited vision, which forced him to take notes with a black sharpie in broad, swooping letters — only a few words filled a notebook page before he was on to the next leaving Lee as one of the biggest contributors to the notebook industry.

This limited vision, though, didn’t keep him from getting around. It always baffled me that while he couldn’t drive, he continued to ride a bike. Quite frankly it terrified me, but if there was one thing you should know about Lee is that he was fiercely independent. He was going to continue getting around on his own despite the challenges. However, one doesn’t simply bike to LeRoy, so enter your neighborhood photographer.

Imagine how thrilled I was when I learned that for his weekly feature in the county, I would largely be his taxi driver? It’s been awhile, but I remember that first ride to wherever we were going as uncomfortable. Knowing he didn’t like me was a challenge I wasn’t sure how to get over, but when it was all said and done, it was Lee’s gift of conversation that cleared that very same hurdle. It wasn’t long before I started looking forward to our weekly trips. Long afternoons spent driving about the county simply talking and enjoying the adventure was — and is — far better than sitting in an office. It’s clear in my mind that it was because of these trips that I would come to know many of the people I know now.

Lee opened doors for me as the new guy to the point where at times, if I was having problems with something in terms of access, I would subtly mention Lee’s name. That led to, “How is Lee doing these days?” or “Lee still giving you problems?” Always there was a laugh and always I was on the way to reaching my objective.

Even after Lee retired and left the profession in 2009, he never truly stepped away from the Herald. Every so often during those years away from the Sharpie I would get an email or a phone call from him. As his eyesight further deteriorated and other health issues came into play, the voice on the other end was instantly recognizable. It was  the same Lee Bonorden I had always known.

He always was asking about someone or another, or making a comment you weren’t entirely prepared for. That was the thing about Lee. Subtlety was not something he was known for and you had better be ready for it.

I know there are few either currently serving or who have served on the county board who are probably nodding in agreement.

Questions and comments always came at the blunt end of commentary. Sometimes you laughed, other times you cringed, but then Lee could do something few others could do. A couple more comments and he was disarming the situation. People may still have been upset, but now they were on to talking about something else.

It didn’t work all the time, but most of the time it did. Lee’s gift for gab often paved the way to another story.

I hesitate to say Lee was a mentor during my years working with him simply because when I came here, I had been in the profession for quite some time. Instead, he was more of a kindred soul, even though a good chunk of years separated us.

I was always astounded by just the sheer amount of people Lee knew. Going to a community wasn’t simply an assignment, it was an event.

A trip to Rose Creek for instance, counting the time there and back for a general assignment, could well be expected to take an hour. But with Lee, you had to count on at least an hour and a half, and that was just to account for the extra time spent talking about those things that had absolutely nothing to do with the story.

When Lee and the good people of the world, like Gary Ziegler, got to talking, you just kind of lost the day, but it’s because of Lee that I am able to count Gary as a friend today.

Sure, in the early years this was somewhat annoying. I had other things to do, but I couldn’t just leave Lee there … though I guarantee he would have had a place to stay or found a ride home.

I haven’t talked to Lee as much as I should have in these intervening years and I will always regret that. It’s a personal failure that will be tempered by more memories than I can count. Our area is going to be less with his passing. It already feels different, just like the Mower County Fair felt different when the news came first of his admittance to hospice, and then his death. Knowing how much he loved visiting the fairgrounds and walking among the people — it felt a little more empty this year. A little less colorful.

Lee was that one-of-a-kind personality we all have worked with at one point or another; the person that no matter where time takes you, the memories remain, vivid as the days you sat next him on the way to Grand Meadow.

Until Lee’s death, people still asked me how he was doing and I enjoyed telling them that not much had changed. Lee is Lee.

But now everything has changed. Lee left his mark on the county and Austin’s newspaper; a mark that will likely be remembered for years to come. But personally, he left a mark on me as well, not just about how to approach work, but how conversation could get you much further than rattling off questions. He showed me what humble journalists can accomplish if you just start with shaking a hand.

However, in the here and now, I will remember how a curmudgeonly beat reporter came to be my friend.

Rest in peace Lee. I hope the pipe is filled with the best tobacco and the conversations are great.

Sincerely, your co-pilot and your friend.

Other’s opinion: As you vote for governor, don’t forget to remember

Annie Lane: My boys won’t work through their trauma

Ask A Trooper: Can hay bales be pulled on state highways?