MINNEAPOLIS (AP) — The drought in Minnesota continues to get worse, exposing rocks, riverbeds and islands in the St. Croix and Minnesota river drying up entire channels in the mighty Mississippi.

The Minnesota Department of Natural Resources has imposed water restrictions for much of the state. Utilities are to limit water use to no more than 25% above January levels. 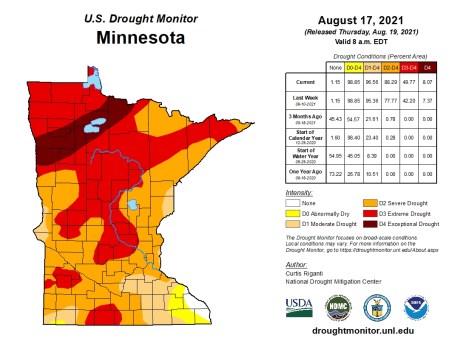 The restrictions apply to about 300 communities within three major watersheds which include the Mississippi River Headwaters and the Rainy River and Red River. That covers the Twin Cities, nearly all of central Minnesota and much of northern Minnesota.

According to the U.S. Geological Survey, about 60% of the state’s streams and rivers are flowing at or near record lows. The flow of the Vermillion River near Voyageurs National Park was down to a trickle Wednesday, the lowest level recorded since measurements began in the 1990s.

Parts of Minnesota have landed in the U.S. Drought Monitor’s most severe level of “exceptional” for the first time since it began ranking droughts by four levels of intensity, the Star Tribune reported.

The weekly update, posted Thursday, shows that 8% of Minnesota is now in an exceptional drought, up from 7% last week. Almost 97% of the state is in some degree of drought, the only exception being the southeast corner.

The state’s drought task force will meet Thursday to give updates on the situation.