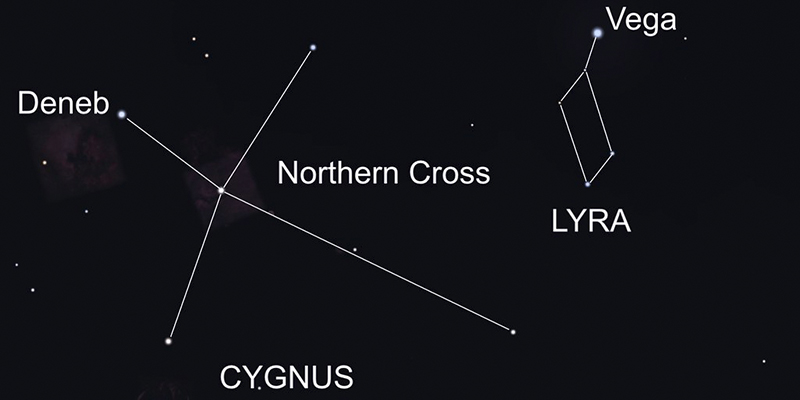 With daylight slipping away, September’s skies make an excellent background for watching stars and planets. 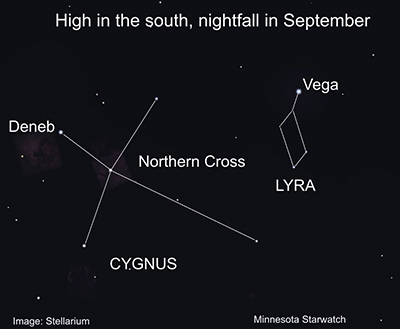 Venus shines briefly above the western horizon after sunset. On the 9th, a young crescent moon joins the planet. As both sink, the brilliant star Arcturus, in Bootes, the herdsman, comes out above them.

At nightfall, the Teapot of Sagittarius hangs low in the south. Its spout tips downward, as if pouring the tea onto the tail of Scorpius. A little further west of the Teapot glows Antares, the scorpion’s red heart.

East of the Teapot, Saturn and brilliant Jupiter dot the darkness. Moving east again, the Great Square of Pegasus is gaining altitude.

Above Saturn and Jupiter, the Milky Way courses through the large Summer Triangle of bright stars. If you haven’t seen the Triangle stars and constellations yet, September is the best month to check them out. Turn your binoculars on the brightest of the three stars: Vega, in Lyra, the lyre. Enjoy its brilliance and the almost perfect parallelogram of stars right below it. Those stars represent the lyre of the mythical Greek musician Orpheus. Also look for the Northern Cross, which extends from Deneb—the least bright star in the Triangle—and outlines the body of Cygnus, the swan.

A waxing moon shines above Antares on the 12th, below Saturn on the 16th, and below Jupiter on the 17th. The moon becomes full at 6:55 p.m. on Monday, the 20th. It rises shortly afterward, so it will be very round as it climbs into the pale but rapidly darkening sky. Because this is the closest full moon to the fall equinox, it’s also the harvest moon. The harvest moon got its name because at this time of year, the moon moves rapidly northward as it waxes to fullness and begins to wane. As a result, the moon rises relatively earlier from night to night, cutting the time farmers have to wait for a source of light for harvesting their crops.

The fall equinox arrives at 2:21 p.m. on the 22nd. At that moment the sun crosses the equator on its way south and Earth will be lighted from pole to pole.