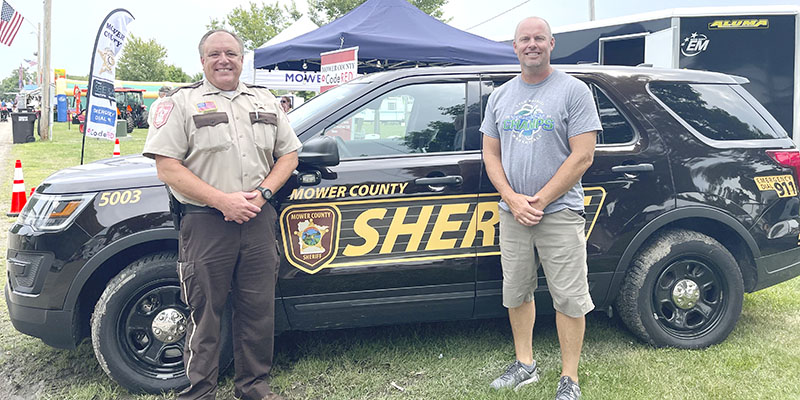 Mower County farmers and their soybean checkoff dollars are giving back to local first responders this summer – and promoting the diverse uses of soybeans at the same time.

The Mower County Soybean and Corn Board will join the Minnesota Soybean Research & Promotion Council (MSR&PC) and its 44 organized counties by turning the key on the “Driving Soy” campaign. The statewide promotion is utilizing Goodyear Tire & Rubber Company’s line of soy-oil tires, putting the soybean checkoff in the driver’s seat while also supporting law enforcement agencies in their communities.

Each organized county (Minnesota is the only state to support county-level soybean programs) will have the opportunity to donate a full set of Goodyear’s soy-based Eagle Enforcer All Weather tires – designed specifically for first responder vehicles traversing rugged climates like Minnesota’s – to their county sheriff’s department.

“This was a great promotion to showcase innovative ways our soybeans are being used,” said Mower County Corn and Soybean Growers Chair Joel Nelson. “Our organization was proud to be able to donate a set of tires to our sheriff’s department.”

Since 2017, Goodyear, supported by United Soybean Board checkoff investments, has released four lines of tires with soybean oil compounds: Assurance WeatherReady, Eagle Enforcer All Weather, Eagle Exhilarate and Assurance Comfort Drive. The Akron, Ohio-based company has increased its use of soybeans by 73% since 2018 and pledged to fully replace all of its petroleum-driven oils with soybean oil by 2040. The Enforcer tires will appeal to more than just law enforcement but also state fleets and municipalities, increasing demand for soybeans grown in Minnesota.

The Mower County Corn and Soybean Growers Association is affiliated with the MSR&PC, which oversees the investment of soybean checkoff dollars on behalf of the nearly 28,000 soybean farmers in Minnesota. The Council is governed by the rules of a federally mandated checkoff program that requires all soybean producers to pay a fee on the soybeans they sell. This money is used to promote, educate and develop market opportunities for soybeans.