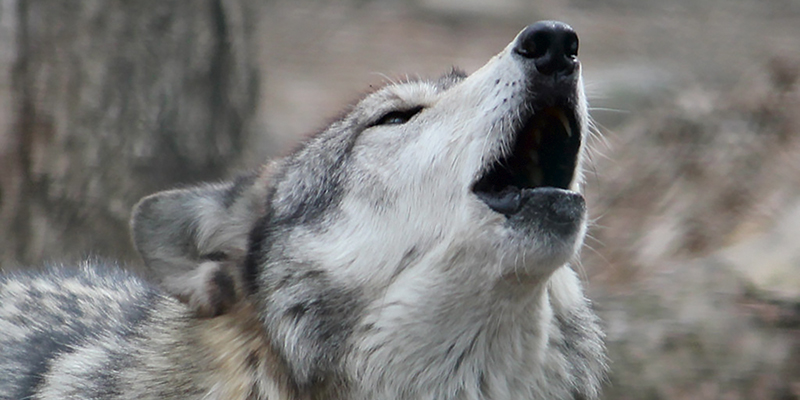 The wolf is a magnificent animal that inspires deep emotions in humans. They can often be positive or negative emotions. Wolves are my favorite mammals. They are a symbol of strength, endurance, spirit and family. The family aspect of the wolf is why I respect and admire them the most.  Wolves have a strong sense of loyalty and love for their family. Their very survival can depend on these close family ties just like in a human family. We need each other for survival.

How do wolves communicate? The most familiar sound is howling. But just like humans, wolves whisper, shout, scream, whimper, murmur or chat to communicate, so howling isn’t the only way wolves vocally express themselves. They also deliver short-range messages types of vocalizations with a bark or a growl. I remember growing up and being reprimanded by my parents with what seemed like a short bark or growl. I understood those messages very clearly!

If you have ever had the opportunity to hear a wolf howl, it is truly a gift. It can literally take your breath away(it did for me). It is a myth that wolves always howl at the moon. Canine experts have found no connection between the phases of the moon and wolf howling. Wolves pipe up more often during the night because they’re nocturnal. But why do they point their faces toward the moon and stars when they howl? It’s all about acoustics since projecting their calls upward allows the sound to carry farther. A howl can be heard up to 10 km / 6 miles from the originating wolf so when they howl, they are broadcasting their message far and wide.

Today, wolf howling is one of the most distinct and well-studied animal vocalizations. Wolves howl for a number of reasons—to assemble the pack for a hunt, to find a mate, to protect their pups, to identify each other and to protect their kill from predators.  They also howl to stand their ground, to keep the pack together, to state their location and give out warnings.  They may also howl because they are lonely. Although we think of wolves howling alone, they frequently do so as a group. Chorus howls involve members of a pack singing in unison at multiple pitches. Together, the chorus may include up to 12 related harmonies. Group howling can protect packs since the combination of harmonies tricks listeners into thinking there are more wolves present, or sometimes they’ll howl just for the fun of it.  An average howl from a single wolf lasts only three to seven seconds. A chorus by a pack can last 30 to 120 seconds and longer during breeding season. Alpha wolves, leaders of the pack, usually display a lower-pitched howl and will sound off more frequently than those with a more subservient social standing. Pups also practice howling as they mature, mimicking those of adult wolves.  Wolves identify each other by these communication sounds.

Why do wolves not howl?  If the wolf pack is small, they are more afraid to howl to strangers or larger more confident packs.  If one pack goes into another’s pack territory they will carefully choose when to howl and when not to howl due to the dangerous conditions. The time of the year is also critical; if the wolves are denning, they will not howl during this time to protect their pups from predators. The position or rank in the pack often dictates who can be allowed to howl.  The alpha male and female are like the mother and father of a human family. They rule the pack. Lone wolves traveling through another pack’s territory will not howl to protect themselves. Wolves hunt in complete silence using nonverbal communication to hunt their prey. If you think about it, there are many similarities between wolves and humans.

The wolf has been the most misunderstood animal of modern time.  It has been feared since the time early pioneers moved from the east coast to the west coast. Wolves and pioneers were often competing for the same food sources and it caused a lot of problems and still does today for farmers and ranchers. Only through education and understanding of the wolf will we learn to balance the relationship between wolves and humans and make sure the wolf population survives. Wolves are a very important part of keeping our ecosystem balanced.

The Minnesota DNR reports that Minnesota has the largest gray wolf population in the lower 48 states. An estimated 2,700 wolves live across 40,000 square miles in northern and central Minnesota. So if you travel “Up North” and hear a wolf howl, howl back!