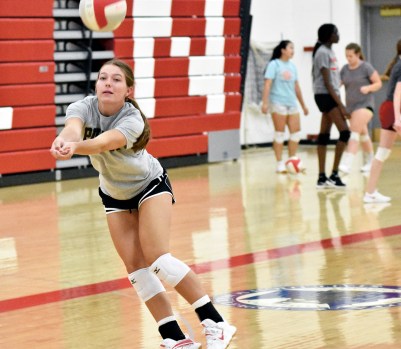 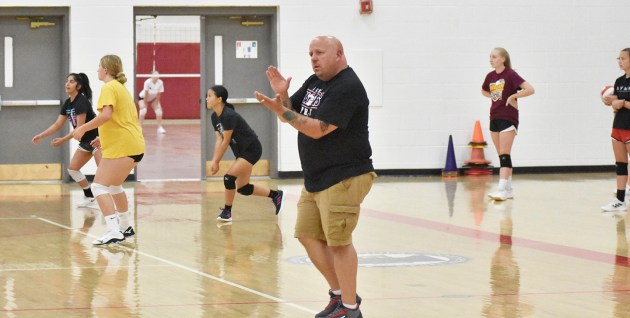 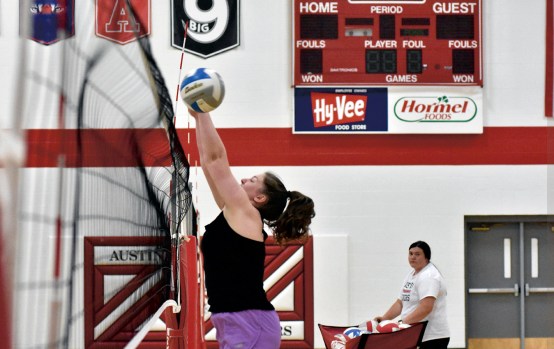 Mallory Brown defends the net for the Packers in practice. Rocky Hulne/sports@austindailyherald.com

When he was the head volleyball coach at Hayfield, Jeremy Struck made a habit out of beating the Austin Packers.

After eight years with the Vikings, Struck is ready to help the Pack. Struck is the new head coach for Austin, making him the third coach in three seasons as he takes over for interim coach Jamie Mauseth, who replaced former coach Lauren Cost in 2020.

Struck led Hayfield to a winning record in every season he coached them and the Vikings were one win away from the state tournament when they lost to Caledonia in four games in the Section 1A title match in 2016.

So far, he’s shown that he is committed to building a program in Austin.

Austin has 60 girls out for volleyball this fall, which is double the number that Hayfield would have in a given season. Struck is hoping to keep those numbers growing and he’d like to see the program score some big victories.

“It’s a new opportunity at a bigger school with a lot of athletes. We’re looking to put some excitement into the volleyball community of Austin. It’s kind of been a roller coaster for a few years. We want to build a program here,” Struck said. “We have athletes, we just need to access their potential with a little encouragement and guidance. Some of these kids have had three coaches in three years and they need some consistency.”

Austin senior Kennedy Bell said the whole team is adjusting to Struck’s style and the Packers are ready to compete in a season where they’re hoping they won’t have to worry about masks or social distancing.

“It’s been pretty smooth so far,” Bell said. “It’s exciting knowing that we might have more fans and more energy than we had last year.”