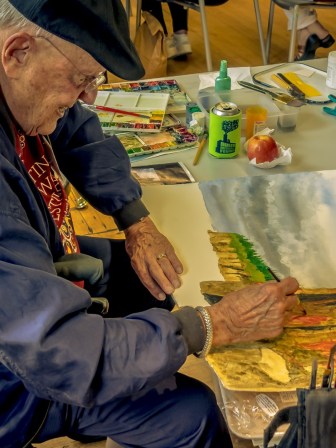 James “Jim” Noel Wegner, age 91, of Austin, Minnesota, passed away Wednesday, August 4, 2021, at St. Mark’s Living in Austin. James was born in Paynesville, Minnesota, to Raymond and Marvel (Grover) Wegner on July 25, 1930. He attended school in Paynesville and graduated in 1948. Jim went on to attend the University of Minnesota Duluth, graduating in 1953 with a degree in art education and a minor in social studies. Jim then served two years in the United States Army, putting his artistic talents to use by brush lettering maneuver charts for 7th Army headquarters. After his honorable discharge from the service, he began a teaching position in Chisholm. In 1956, Jim accepted a position in Austin, which was the start of a 38-year career. He spent 10 years with Austin Public Schools and 28 years with Riverland Community College, where the art gallery is named after him. On December 29, 1956, Jim married Catherine Brown in a snowstorm. The couple were kindergarten friends. Jim continued his education at the University of Minnesota Duluth, where he received a master’s degree in painting and art history. He studied with major artists at both the University of Colorado and the University of Minnesota Duluth. Jim was a master teacher for the London Dash for 22 years and for 24 years hosted gallery/theater tours to Chicago. He was an active volunteer and presenter with the Austin Art Center and also taught classes and held open studio sessions for budding artists. Jim was a member of the First United Methodist Church, where he helped select the organ, sang in the choir, and designed beautiful banners for the church. He was also a member of the American Legion Post 91 and Vision 2020. Jim sang in many musical groups including, Austin Male Chorus, Northwestern Singers, and Express Male. He was a president of the Mower County Horticulture Society and the Minnesota Art Educators for several years. He enjoyed gardening, photography, and traveling. While traveling Jim documented his trips through drawings. He will be dearly missed by all who knew and loved him.

A memorial service will be held at 2:00 p.m. on Monday, August 16, 2021, at Worlein Funeral Home Chapel in Austin. Visitation will take place one hour prior to the service. Private interment will be in Paynesville Cemetery, Paynesville, Minnesota at a later date. Military honors by American Legion Post 91 and V.F.W. Post 1216. Memorials are preferred to the Austin Area Art Center or First United Methodist Church. Services are prearranged and performed by Worlein Funeral Home of Austin. Condolences may be expressed to the family online at www.worlein.com.