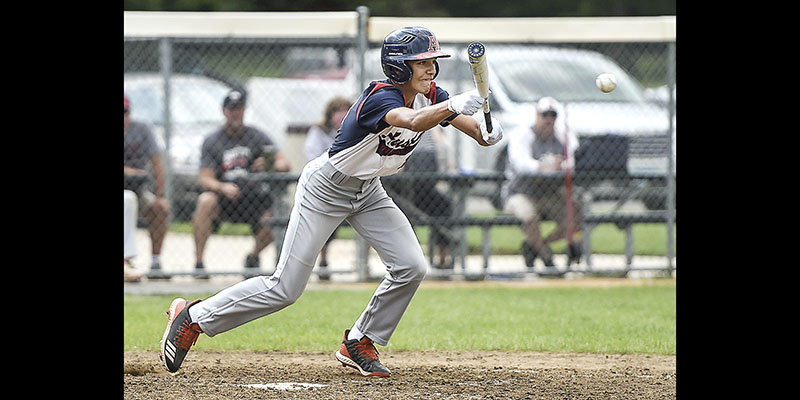 Austin VFW’s Isaac Osgood reaches out to lay down a bunt against the Rochester Rockets this season at Marcusen Park. Herald file photo

The Austin Post 1216 VFW baseball team knew it would be hosting a state tournament at the beginning of this summer, but it may not have guessed that it would be coming in with loads of confidence, depth, and a 22-game winning streak.

After a 5-3 overall start and a different batting order in each of its first 16 games, Austin (27-3 overall) is ready to end the summer with some fireworks as it plays host to the State VFW Baseball Tournament Thursday, Friday, Saturday and Sunday.

Austin head coach David Lillemon has seen the team grow throughout the summer and he’s hoping that a state tournament appearance can serve as the cherry on top of an already fabulous summer of baseball.

“When the season started, we knew we were going to be here and it gave us a goal at the end of the season to work hard for. It’s reassuring to know that you have that big prize at the end of the tunnel,” Lillemon said. “What makes it special is that we earned it. We won the divisional and the district and we didn’t back in. The way we played down the stretch is very rewarding and we’re very excited to share this with the community, the families and amongst the players and coaches.”

Post 1216 will try to cut through the double elimination 10-team tournament with a wealth of pitching depth. Starters Nick Robertson, Brayden Bishop, Patyon Ransom and Isaiah Conway have all proven to be solid and Jake Truckenmiller, Jared Lillemon, Isaac Osgood and Sam Oehlfke are also capable of throwing key innings.

“I’m excited to play in front of our friends and family. It’ll be fun having the best teams in the state coming here to play,” Ransom said. “Having the pitching depth that we do is huge, because we can rely on our teammates when we get deep into the tournament.”

Post 1216’s bats have caught fire during the postseason, but exceptional defense and solid pitching have carried the team through much of the summer. Lillemon pointed to a deep roster and a commitment to improvement as grounds for the team’s success.

“Our depth happened a little bit by accident,” Lillemon said. “We’ve had so many various sports camps, church events and injuries and it’s forced me to play people at different positions and we’ve created a lot of depth. We’re dangerous because we have so many kids that have contributed throughout the year.”

Lillemon’s son Jared, who plays shortstop, is one of the veteran leaders on the team and has seen the squad make big strides this season. He’s now anticipating a fun four days of baseball, even if it is during the same week of the Mower County Fair.

“It’s going to be nice to go to the fair to have something to do outside of the games to keep our minds relaxed, but when we’re at the park, we’ll be focused on baseball,” Jared said. “We pushed through the season and now we’re going to have fun. At the beginning of the year, it was looking pretty ugly. We’ve all developed a lot and we’re playing great now.”

David is hoping the team embraces the chance to play in the biggest tournament that VFW baseball has to offer.

“I told them that you don’t get to play in too many state tournaments in your lifetime, and this might be the only one they get to play in,” David said. “We want them to enjoy it and embrace it. We expect good things, but we don’t know. The unexpected is what makes it fun and I think these kids will respond.”

Packers show their stuff in home track and field meet