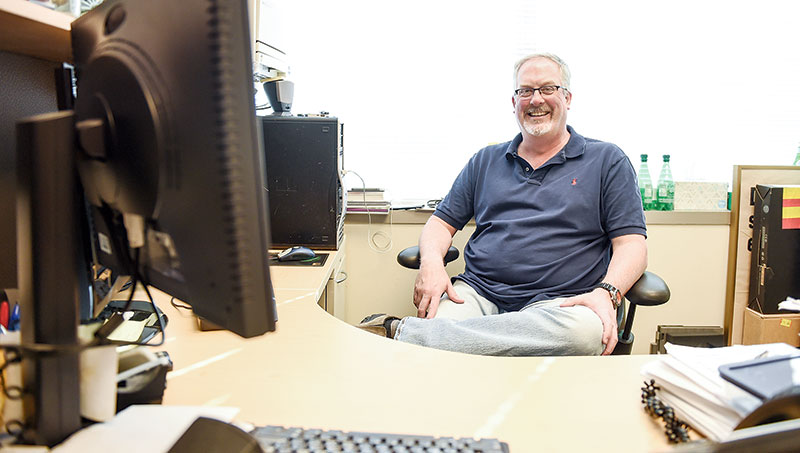 Dr. Ted Hinchcliffe was recently a part of a massive grant distribution for his work on pediatric brain cancers in conjunction with the Mayo Clinic. Eric Johnson/photodesk@austindailyherald.com

The Hormel Institute’s Dr. Edward “Ted” Hinchcliffe, Professor of Cell Biology and head of the Cellular Dynamics lab, has been awarded a U.S Department of Defense Pediatric Brain Cancer Research Grant. The $800,000 grant starts on Sept. 1 and runs until 2024.

Hinchcliffe is collaborating with Dr. James Robinson, Assistant Professor and head of the Cell Signaling & Tumorigenesis lab at The Hormel Institute, to explore a potential therapy for diffuse midline gliomas, an extremely aggressive type of pediatric brain tumor. There is currently no treatment for this type of cancer and the survival rate is less than one year from diagnosis.

“We are using therapeutic agents that stimulate the innate immune system to attack the tumor cells,” Hinchcliffe said. “The innate immune system is normally triggered in these tumors by mis-segregation of chromosomes during cell division, but can become ‘silenced.’ Our goal is to ‘wake it up.’ We are also testing a second therapeutic agent to try and increase chromosome mis-segregation in the tumors to see if this can boost the effect.”

This is Hinchcliffe’s third grant in a row from the Department of Defense, dating back to 2013. The preliminary data used to obtain this funding was generated with the support from the University of Minnesota — Mayo Clinic Partnership Grant Hinchcliffe received in 2020.