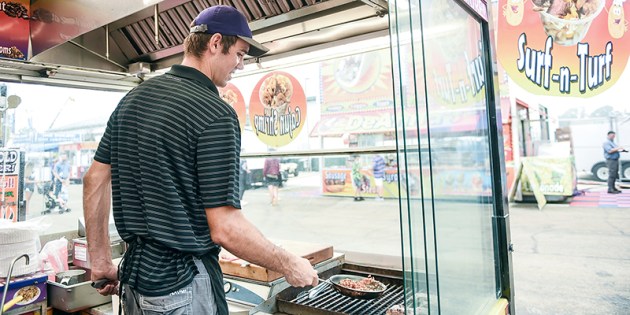 Ryan Hagy cooks up food from the DeAnna’s food trailer, one of five at this year’s Mower County Fair. Eric Johnson/photodesk@austindailyherald.com 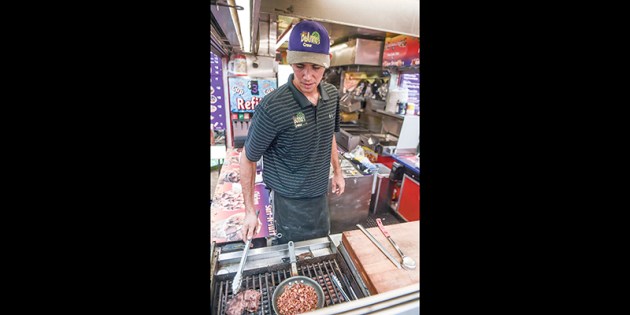 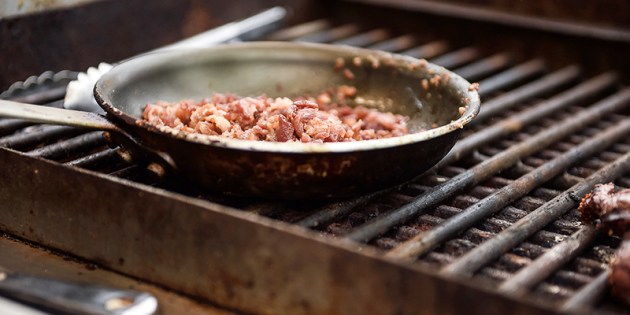 Steak is cooked up on the grill, ready for a busy first day at the fair for DeAnna’s. Eric Johnson/photodesk@austindailyherald.com 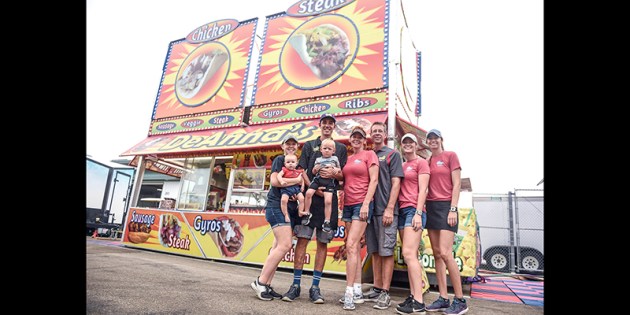 The Hagy family has been all in with a number of DeAnna’s stands for nearly 30 years, including the Mower County Fair which opened Tuesday. Eric Johnson/photodesk@austindailyherald.com 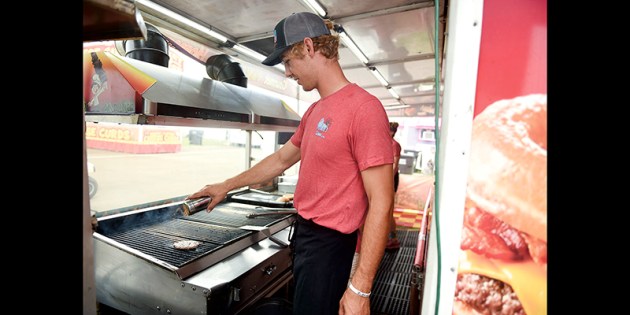 Dustin Hagy applies seasoning to a burger as his DeAnna’s Diner stand opens to the public Tuesday at the Mower County Fair. Eric Johnson/photodesk@austindailyherald.com

Ryan Hagy has memories of the Mower County Fair stemming back to when he was a little kid; memories of he and his siblings going on rides, seeing grandstand events, and looking at the 4-H animal displays.

“We love Austin and we love the Mower County Fair,” he told the Herald.

But Ryan wasn’t at the fair just as a visitor. He and his siblings were there selling food with their parents, DeAnna and Jeff Hagy, owners and operators of DeAnna’s Food Concessions, also known as DeAnna’s Steak Sundaes.

Now 28-years-old, Ryan helps operate the family business, which has consistently had a presence at the Mower County Fair for 25 years.

“My mom and dad started (DeAnna’s) 30 years ago,” he said. “They used to live in Chicago, so we do a ton of Midwest stuff in Minnesota, Illinois, and Wisconsin. The Mower County Fair was one of the first ones that we added. The people are awesome here and they received us really well, so we made it a point to come back each and every year.”

DeAnna’s currently operates five food trailers at the Mower County Fair: an ice cream trailer, a fresh squeezed lemonade trailer, a burger trailer, a steak sundae trailer and the original DeAnna’s Steak Pita trailer. All are operated by members of the Hagy Family and boast menus that stand out from your typical fair food.

Take for instance the steak pita.

“The great thing about this is you get your steak sandwich and we have a topping bar,” Ryan said. “We have three different kinds of cheeses to choose from, you have all kinds of different fresh vegetables, grilled onions, grilled mushrooms, different salsas and sauces to put on, so each time you can make it a bit different or you can make it the same, based on what you like.”

Then there is the popular steak sundae, which features French fries topped with steak, bacon, sour cream, and cheese, as well as other topping options.

For those with a sweet tooth, Ryan recommends the hot fudge brownie sundae offered at their ice cream trailer.

But for those who want savory and sweet, Ryan said hungry fair goers should “hands down” try the burger trailer’s donut burger.

“We bake our own homemade donuts, so it’s not overly sweet,” he said. “We slice the donut in half, add a 1/3 pound angus beef, cheese, bacon, and all of your toppings. Then the top of the donut goes on top and we drizzle icing over the top of it. You get the burger, you get the bacon and you get a little bit of sweetness from that glaze. You take a bite and you’ll be hooked.”

DeAnna’s menu drew the attention of the Food Network and the Cooking Channel, which featured the burger trailer and steak sundae trailer on the show “Carnival Eats.”

Aside from the Mower County Fair and events in other midwestern states, DeAnna’s also works festivals in Georgia, North Carolina, South Carolina, and Florida, where they also do catering.

During their frequent trips to the Mower County Fair, the Hagy Family has made friends out of customers.

“The people here are our best memories,” Ryan said. “We’ve made a lot of great friendships with our customers. Some come and visit us in Florida during the winter. It’s awesome.”

Adding to the memories is the opportunity for Ryan to see his children attend the fair that has been a part of his life since he was their age.