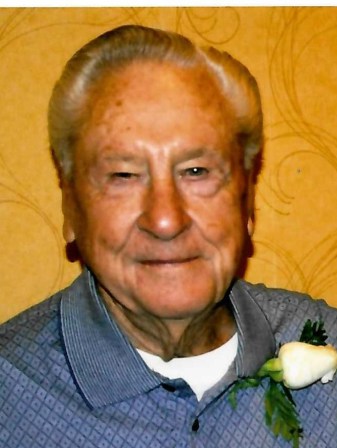 Donald B. Hoban, 100 of Austin, Minnesota, passed away at the Cedars of Austin Assisted Living on Sunday, August 8, 2021.

Donald Bernard was born May 16, 1921 in Waterville, Minnesota to Jay and Edith (Gregor) Hoban. He graduated with the Class of 1939 from Waterville High School, and went on to attend Hamline University in St. Paul.

In March of 1943 Don entered military service during WWII in the United States Army Air Corps. He served in the Pacific Theater, and was honorably discharged in November of 1945.

On May 20, 1950 Don was united in marriage to Beverly Ann Bartelt in Waterville, Minnesota. They resided most of their married life in Austin where he enjoyed a long career with Huntting Elevator.

Don enjoyed golfing, crossword puzzles, and playing cards. He was an active member and former chaplain of the Austin American Legion Post #91.

Don is survived by his children, Douglas and Cathy Hoban, Gary and Diane Hoban, Thomas and Susie Hoban, Cindy and Richard Fett, Bradley Hoban, and Donald Hoban Jr.; 14 grandchildren and 18 great grandchildren; sister, Shirley Miller; many nieces and nephews, cousins and other relatives and friends.

Funeral services will be held at 11:00 am Friday, August 13, 2021 at Christ Episcopal Church in Austin with Father Jon Spinillo officiating. Interment will follow at Grandview Cemetery, with military honors by Austin American Legion Post #91 and Olaf B. Damm, Post #1216, V.F.W.

Visitation will be held on Friday morning from 10:00 to 11:00 am prior to the service, at church. Arrangements are being handled by Clasen-Jordan Mortuary in Austin.