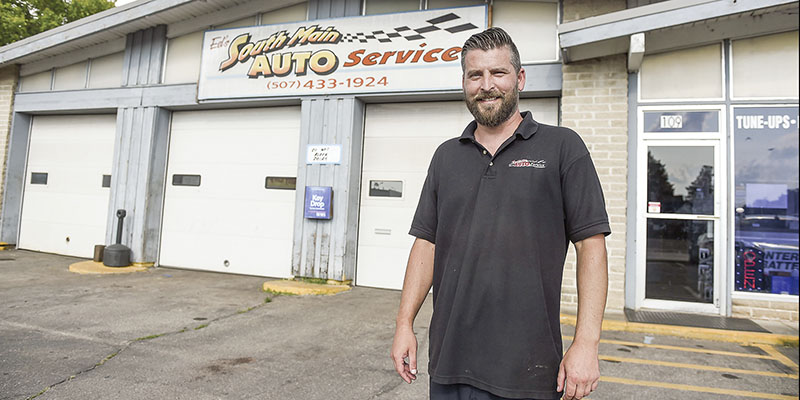 Ryan Robertson stands outside of South Main Auto last week. Robertson is the new owner of the garage having taken over from original owners Ed and Sue Wells in June. Eric Johnson/photodesk@austindailyherald.com

When you took a vehicle to South Main Auto, there was one thing you knew you would get above all else from owners Ed and Sue Wells — friendly, dedicated service. 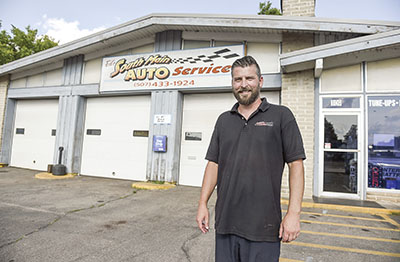 Ryan Robertson stands outside of South Main Auto last week. Robertson is the new owner of the garage, having taken over from original owners Ed and Sue Wells in June. Eric Johnson/photodesk@austindailyherald.com

The Wells retired this past spring after establishing the business in 2003. Robertson took over ownership on June 1, the end of a long journey.

“It probably took two years to try and buy this place,” Robertson said, indicating he first tried to buy the business by going through the Small Business Association. “Had to do it with an old-fashioned loan.”

Robertson was hired in 2015. Before that, he had been working in automobile maintenance from the age of 19 as a basic service mechanic.

When he was hired by Ed and Sue, Robertson was already interested in the future.

“Initially right away when I started here I mentioned it to him,” Robertson said. “It wasn’t until two years ago that it got serious.”

Robertson said that Ed and Sue were instrumental in getting him this far as they established a familial bond. That bond has carried over to Robertson as South Main’s new owner.

“It was amazing working with Ed,” Robertson said. “I have an awesome relationship with him. The same with Sue.”

Above all, the ideas of how to serve the customer carried over the strongest. Just by watching Ed, Robertson saw how things were done properly.

“Really honest,” Robertson said. “Basically he taught me all of that. Continuing on with the same basic operations. If you do that, the people will return.”

And over the years, they have. On some days it’s hard to even find a parking space at the small, two-door garage. Some of that comes from Ed’s time with Kmart.

“Even at Kmart, it was how he treated people,” Robertson. “Price them fairly.”

It’s because of that background that Robertson said people can expect very little change beyond basic cosmetic things like a paint job and a new sign.

What it comes down to is the customer walking away satisfied with whatever work was done: oil changes, tires, brakes, front end work, fluid exchanges, tune-ups, suspension and steering.

“As long as everybody is happy about the work,” Robertson said. “Tried and true.”

And Robertson certainly doesn’t forget the support he received from the people who hired him.

“A huge ‘thank you’ to Ed and Sue Wells,” Robertson said. “Happy retirement and thank you for everything.”

An open house for Ed and Sue Wells will be held this Friday, Aug. 28, at 1 p.m. at the Eagles Club here in Austin.