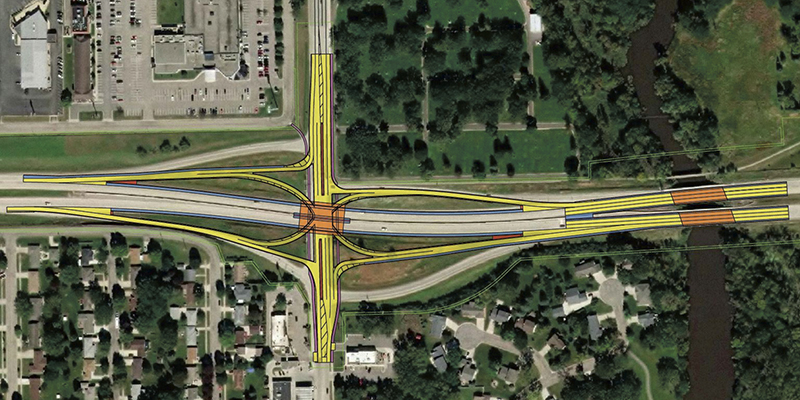 This graphic shows the single point interchange design chosen by the City Council Monday night. Photo courtesy of the Minnesota Department of Transportation

The Austin City Council opted to recommend a single point interchange bridge design for the scheduled replacement of the Fourth Street Northwest Interstate 90 bridge to the MInnesota Department of Transportation (MnDOT) during its work session Monday evening.

MnDOT provided three design options for the bridge, which is scheduled to be replaced in 2023.

MnDOT said that all of the designs were viable options, but responses received from a public survey did not point to a specific design, prompting MnDOT to get guidance from the council.

After a discussion, the council unanimously voted to instruct Lang to recommend the single point interchange design to MnDOT.

More information on each design can be found at https://arcg.is/04aHfb.

The council also looked at city liquor laws during the meeting, unanimously opting to forward a vote to the next meeting on the repeal of a regulation that prohibits an entity from holding more than one on-sale liquor license and to raise the limit of bars in Austin from 16 to 18, which is the number of bars Austin is legally allowed to have under current state code.

The council unanimously voted in favor of accepting coronavirus local fiscal recovery funds established under the American Rescue Plan Act during its regular meeting. The City of Austin was allocated $2,670,080.90 in ARPA funds, half of which will be paid this year with the remaining half being received next year.

The council also voted in favor of approving the 2021 Hormel Foundation grant recommendations during the meeting. Every year, the council prioritizes grant applications at the request of the Hormel Foundation, who takes the council’s rankings into consideration when awarding the grants.  The requests were ranked as follows:

The council also approved a library construction grant application for $319,800, which will be put towards a proposed expansion of the library if approved.