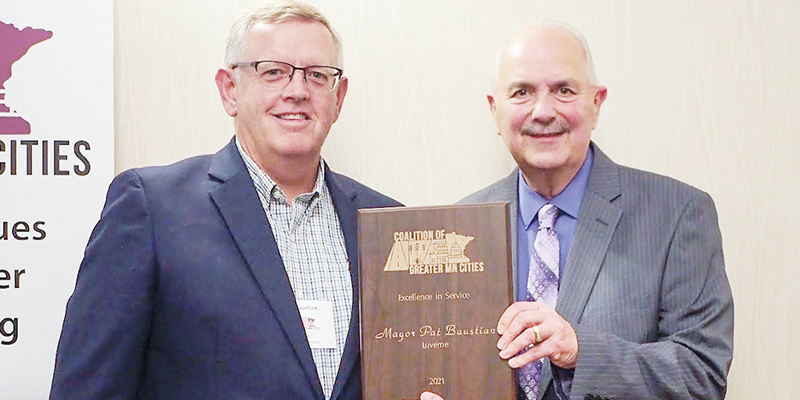 ST. PAUL — Luverne Mayor Pat Baustian was elected to serve as president of the Coalition of Greater Minnesota Cities (CGMC) July 30 at the Coalition’s summer conference in Alexandria.

Baustian was elected by fellow city officials from across the state to lead CGMC, long considered one of the most active, high-profile organizations to represent rural communities at the State Capitol.

“Mayor Baustian is respected across the state for his thoughtful, pragmatic leadership on issues that impact his community and other cities in Greater Minnesota,” said Bradley Peterson, executive director of the CGMC. “I’m confident that he will be an excellent person to lead our organization as we help rural communities move past the pandemic and find new ways to grow and thrive.”

In addition to being elected president, Baustian was also honored with the CGMC’s Excellence in Service Award, which is given annually to city leaders who demonstrate knowledge, leadership and active participation in CGMC program areas over the past year. The award was handed out at CGMC’s awards dinner on July 29.

As a long-time member of the CGMC Board of Directors and active participant in the organization, Baustian was recognized for his efforts related to finding solutions to the child care crisis that plagues rural communities. This year, he testified before several legislative committees in favor of legislation that aimed to support child care providers and increase child care capacity in Greater Minnesota. He also participated in media visits to bring attention to the child care issue and joined Ely City Councilor Heidi Omerza to co-author a guest column that appeared in more than a dozen media outlets statewide.

Little Falls Mayor Greg Zylka, whom Baustian is replacing as CGMC president, praised Baustian’s work on child care and said he was happy to “pass the torch” to the Luverne mayor.

“Mayor Baustian has been an excellent spokesperson for Greater Minnesota cities on an array of issues including child care, economic development and environmental regulations,” Zylka said. “The CGMC will be in good hands as he takes the helm as president.”

Baustian said he looks forward to leading CGMC as it continues to guide Greater Minnesota cities through the pandemic and into the future. He noted among the CGMC’s top priorities for the upcoming year will be to protect and defend LGA, advocate for a substantial bonding bill that invests in critical infrastructure, and continue to explore solutions to the child care, housing and workforce shortages in Greater Minnesota.

“I am honored to be chosen to lead the CGMC as we fight for the needs of rural communities,” Baustian said. “There are a lot of challenges on the horizon, but I look forward to working with state lawmakers and my fellow city leaders to find ways to solve problems and strengthen our cities.”