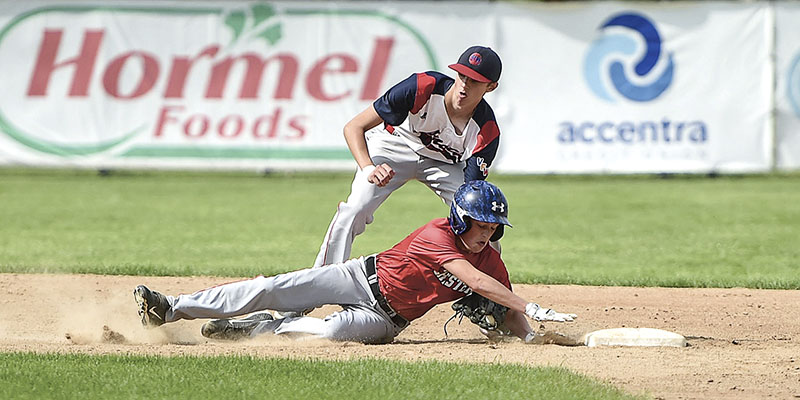 Austin’s Jared Lillemon puts the tag down to get the pick-off against the Rochester Rockets at Marcusen Park this past July. Herald file photo

After a year without any VFW baseball, Austin is set to celebrate the sport as it will play host to the 66th State VFW Baseball Tournament this week.

The tournament will bring players from all around the state in town to play baseball, make friends and soak up the last bit of summer before preparing for school in the fall.

“If people want to see some good youth baseball, we’re going to have the 10 best teams in the state of Minnesota competing for four days,” said Scott Weichman, Austin VFW Post 1216 commander, and the Department of Minnesota Chairman of all Youth Activities. “Anytime you can get the youth involved in sporting competitions, I think it’s good for them to be doing things outside and learning the lessons that they learn from being on the team and competing with other teams. They learn a lot more than just playing baseball.”

Opening ceremonies for the tournament will take place at Marcusen Park at 10:30 a.m. Thursday. VFW Department Chaplin Len Gudmunson will offer an opening prayer, David Chao will sing the national anthem, and World War II veteran Sy Schaefer will throw out the first pitch of the first game.

The tournament will bring 10 teams to Austin and games will take place in Marcusen Park on Thursday, Friday, Saturday and Sunday. Seltz Field will host games on Thursday and Friday.

Any veterans living in assisted living facilities in Austin have all been invited to attend as guests of the VFW for the opening game, where they will be recognized.

“One of the reasons we are able to get together and play baseball is because of the sacrifice of our veterans and comrades that didn’t make it home,” Weichamn said.

Austin last hosted the state VFW baseball tournament in 2010 and Weichman is excited about the boost it can give to the restaurants and hotels in Austin. He’s also excited that more kids will be able to experience the lore of Marcusen Park, which opened in 1948.

“Marcusen Park is a historic baseball field in Austin. To be able to utilize that and provide some revenue for their operation is important,” Weichman said. “This is the 66th year of the VFW tournament. It’s important that we keep doing it and keep the tradition alive of VFW youth baseball.”