Arrest made in Friday morning standoff 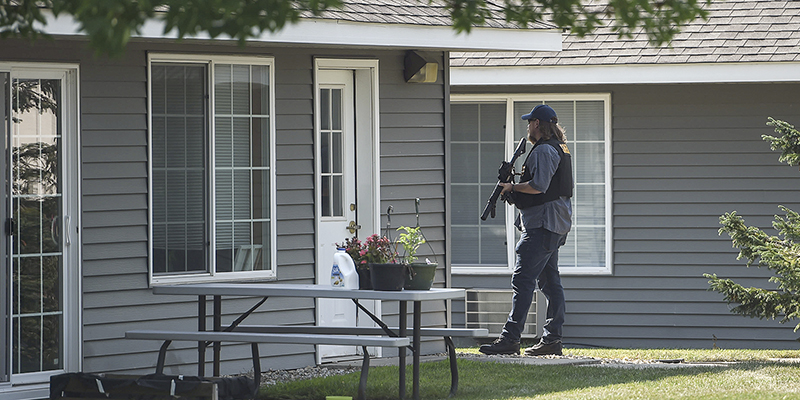 A Mower County Sheriff’s investigator stands watch on the courtyard of Whittier Place Friday morning during a standoff. Eric Johnson/photodesk@austindailyherald.com

An Austin man was arrested after a Friday morning standoff after allegedly being found hiding in the trunk of a vehicle with firearms and suspected drugs.

According to Austin Police Chief David McKichan, police responded to a complaint of two vehicles chasing each other at about 9:30 a.m. on Aug. 20 in Southeast Austin. An officer located one of those vehicles, a white Chevy Impala with a broken rear windshield and flat tire, in the area of Main Street and First Avenue South. When the officer attempted to stop the vehicle, it fled from him for several blocks before parking. A male then fled into an apartment in the 400 block of Third Avenue Southeast.

It was apparent the Impala had been damaged by bullets.

Police, assisted by Mower County deputies, believed that the occupants of the apartment knew they were outside and spent some time giving them announcements attempting to get them to exit. An adult female, adult male, and several children ultimately exited the apartment. The adults told officers that no one else was in the apartment.

While executing a search warrant, members of the Special Incident Response Team (SIRT) located Ryan Christopher Collins, 32, of Austin concealed behind a large speaker in the trunk of a car parked in the attached garage. Suspected methamphetamine, cocaine, marijuana, and MDMA, along with two loaded revolvers and a loaded semi-automatic handgun, were also found in the trunk. One of the guns was confirmed to have been registered as stolen.

Collins indicated to detectives that he had been in Austin for about two months. He said he was being shot at by another party

whom Collins indicated believed Collins had burglarized his home and also believes Collins had previously robbed him. Collins identified a white Porsche as having been the second car involved. Collins denied that the guns and drugs found in the trunk where he had been hiding were his.

Later that day, police executed a second warrant in conjunction with the case at a residence in the 1000 block of Second Avenue Southwest. Police arrested Terry Izeal Heggs, 38, at the location on a Department of Corrections pick-up.

A Porsche was taken into evidence via search warrant on Aug. 21 from a separate location in Austin.

This case remains active and under investigation.