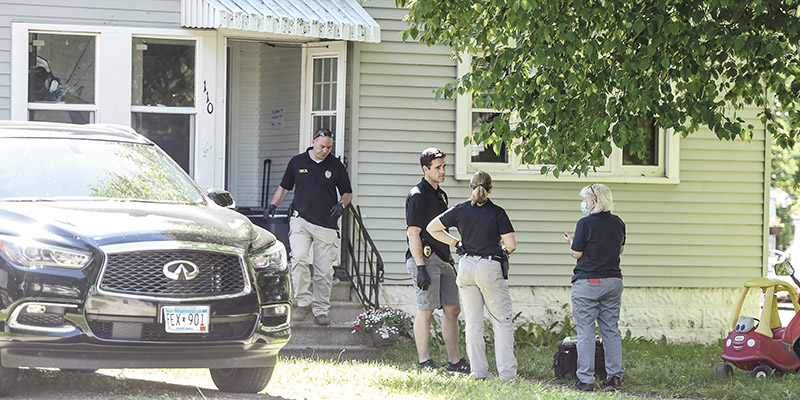 Austin police and members of the Minnesuta Bureau of Apprehension talk with the coroner, right, at the scene of the shooting death of David Harris in June. Herald file photo

MINNEAPOLIS — Violent crime surged nearly 17% across Minnesota last year, including a record number of murders, according to data released Tuesday by the state Bureau of Criminal Apprehension.

The annual Uniform Crime Report covers a year marked by unrest over the death of George Floyd in Minneapolis, staffing and morale problems within the police department in Minnesota’s largest city, and the COVID-19 pandemic, which caused a surge in unemployment and other stresses on society, and a rise in violent crime in many other American cities. But the report’s purpose is mostly to compile statistics for others to study, and it contains little analysis.

Other significant trends included a nearly 54% increase in arson to 710 fires after several years of declines. Motor vehicle thefts rose nearly 20% to 13,662, the most since 2005, amid a surge in carjackings. Bias crimes hit the highest number in 15 years, with 223 incidents reported, and 41% were motivated by bias against Blacks. The value of property stolen jumped nearly 55% to $216 million, with big increases in thefts of food, grooming products, cash and vehicles.

Republicans seized on the data to portray Democrats as weak on crime, which is expected to be a major campaign issue in upcoming elections. Senate Republicans, in particular, blamed Democratic Gov. Tim Walz and Minneapolis officials, and faulted their response to last summer’s unrest.

“This is why you can’t go soft on crime,” Senate Majority Leader Paul Gazelka, of East Gull Lake, said in a statement. “It’s hard to see these numbers for arson, theft, and assaults on police and wonder: Would it have been better if Gov. Walz stopped the riots right away last year?”

The governor’s office did not immediately respond to a request for comment.

The top Republican on the House public safety committee, Rep. Brian Johnson of Cambridge, said the divided Legislature took steps this year to address the rise in officer-involved shootings and to improve training and use-of-force standards, as activists demanded. But he said Democrats rejected GOP proposals to combat rising crime.

“With (Democratic) politicians pushing anti-law enforcement and defund the police policies in our cities, it’s more important than ever that we step up at the state level to address rising crime and make Minnesota a safe place for all families,” Johnson said in a statement.

The BCA reported 31 officer-involved shooting incidents in 2020, up six from the year before, almost evenly split between the Minneapolis-St. Paul metro area and greater Minnesota. There were 45 use-of-force incidents that involved gunfire or resulted in serious injury or death. Nine resulted in death, nine in serious injuries and five involved gunshot injuries. The report said 21 of the subjects were white, 14 were Black, three were Native Americans and three were Asian, while the races of five weren’t known.

Assaults against on-duty officers rose 62% to a record 667.

The sharp increases after improvements in recent years were disturbing to Bill Hutton, executive director of the Minnesota Sheriffs’ Association and a former Washington County sheriff.

“As a society we need to look at this really hard,” Hutton said in an interview. “We obviously need to work together, meaning the community and policy-makers, and we have to come up with some solid plans to curtail this and do better.”