Uptick in cases but no signs of a surge 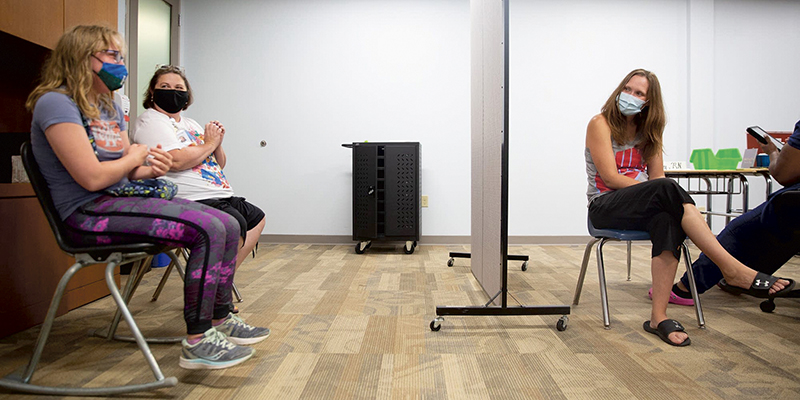 Allyson Ashley, right, looks around a barrier at her daughter, Isabel Ashley and Lionsgate Academy district school nurse Pia Prenevost before getting their COVID-19 vaccines at the school on June 28. Evan Frost/MPR News file

Minnesota continues to see COVID-19 case counts edge higher, but there’s nothing yet to suggest the state is headed for another major wave. While new daily cases are up, key metrics continue to hover at relatively low levels.

Hospitalizations are holding roughly steady at about 100. The state averaged about three deaths daily during the last reporting week — down near levels not seen since the earliest weeks of the pandemic.

That’s not to say there are no concerns. Cases are up most significantly among Black Minnesotans, who have a much lower vaccination rate compared to whites or Minnesotans of Asian descent.

Also, the worrisome delta variant of COVID-19 is growing in Minnesota. “It’s a variant that we are concerned about,” state infectious disease director Kris Ehresmann told MPR News Tuesday. “We’re concerned about its circulation in populations who are not vaccinated.”

Known, active COVID-19 cases in Minnesota came in at 1,026 in Tuesday’s report, although the seven-day trend for those active case remains under 1,000. Counts have fallen dramatically since May 1, when Minnesota had more than 15,000 active cases.

Hospitalizations have stayed relatively steady the past few weeks — 104 patients are in Minnesota hospitals with COVID-19, with 23 in intensive care. That’s likely to increase somewhat given the recent uptick in caseloads.

Three newly reported deaths on Tuesday raised Minnesota’s pandemic toll to 7,627. Among those who have died, about 59 percent had been living in long-term care or assisted living facilities; most had underlying health problems.

The state’s recorded 606,870 total confirmed or probable cases in the pandemic, including the 386 — a three-day sum — posted Tuesday.

Roughly 99 percent of Minnesotans known to be infected with COVID-19 have recovered to the point where they no longer need to isolate.

People in their 20s still make up the age bracket with the state’s largest number of confirmed cases — more than 112,000 since the pandemic began.

Although young people are less likely to feel the worst effects of the disease and end up hospitalized, experts worry they can spread it unknowingly to older relatives and members of other vulnerable populations.

About 3 million residents 16 and older now have at least one vaccine dose.

Add in more than 112,000 12-to-15-year-olds with at least one dose and Minnesota has topped 3 million residents with one or more shots. About 53 percent of the state’s total population is now completely vaccinated.

While Minnesota’s vaccination rate recently showed an uptick, the pace has fallen dramatically since peaking in April and continues to trudge along.

At the current pace, it appears it will be late August or early September before Minnesota has 70 percent of residents 16 and older with at least one vaccine dose — a target officials once hoped to reach by July 1.

Minnesota’s also seeing big regional gaps in vaccination rates, with most counties outside the Twin Cities region still below 70 percent of adults vaccinated.