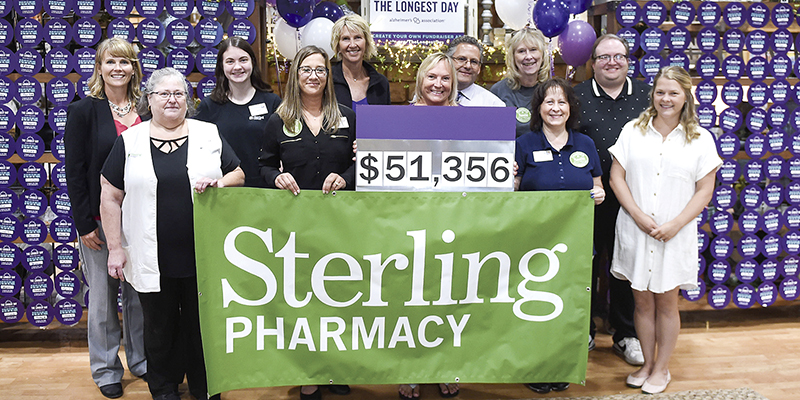 Representatives of Sterling Pharmacy, Astrup Family Foundation and the Alzheimer’s Association come together in a donation of $51,356 Wednesday. Eric Johnson/photodesk@austindailyherald.com

Employees of Sterling Pharmacy came together Wednesday, along with the Alzheimer’s Association, to celebrate a donation of $51,356 raised during a recent fundraising effort by the Pharmacy and its locations.

Pharmacies throughout southeast Minnesota and northern Iowa raised $25,678 in the month of June during the sixth annual drive, an amount that was matched by the Astrup Family Foundation, created in honor of the Sterling founder Leonard Astrup, who passed away in 2014 from complications of the disease.

Normally, the foundation matches up to $25,000, but this year’s effort was worth rewarding.

“We were so blown away we decided to match the entire amount,” said Susan Astrup Lundquist, Leonard Astrup’s daughter and president of the Astrup Family Foundation.

Throughout the month of June, employees asked customers when checking out if they wished to donate to the cause. Those who donated had their names written on cards, which were placed on the walls of Sterling.

On Wednesday, the sheer number of those cards made it evident just how successful the campaign was this year.

Fifteen stores took part in this year’s drive, which was the most successful of the six years. To date, the drive has raised $215,778 and it’s made even more impressive considering the area is still trying to emerge from the COVID-19 pandemic.

Maura Studer, Longest Day Event manager for the Minnesota and North Dakota chapters of the Alzheimer’s Association, looks at the success of the drive as an indicator of the awareness being raised for Alzheimers and points out that more and more people are either suffering from the disease or know somebody who is.

“Alzheimers is the sixth leading cause of death in the United States,” Studer said. “The numbers are going up and people realize there is a need. Funds from this can help spread that awareness.”

For those who knew Astrup, the success of this continuing effort would be something close to his heart.

Sterling Pharmacies President Sam Ewing said those who work in the stores also recognize the importance of raising this kind of money.

“It’s also a cause that’s important to us,” he said. “We’re all here because of him. He had a lot of employees at the store that knew him very well. It’s more than just a donation. It means a lot as an employee.”

It’s something Lundquist said Astrup would have been warmed by.